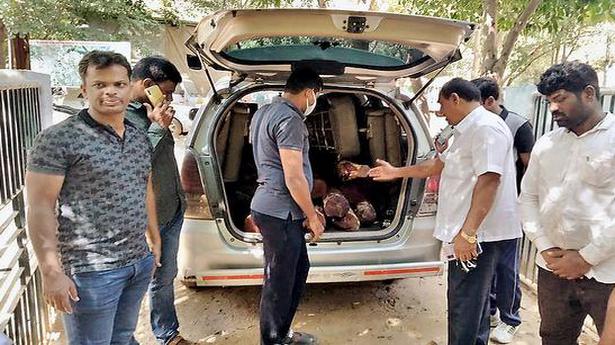 The task force teams seized red sanders logs worth ₹50 lakh, three cars and nabbed six accused after a 180-km chase from Chandragiri near Tirupati till Kolar in Karnataka.

Acting on a tip-off that a group of operatives were getting ready to transport red sanders logs from the Tirumala foothills near Chandragiri to Karnataka, special teams raided the stretch from A.Rangampeta to Ithepalle road, connecting to the national highway towards Kolar.

In the early hours, the task force spotted three cars. Seeing the combing party, two cars sped away towards the NH from a rural road, abandoning one car near Ithepalle. The task force teams gave a hot chase to the vehicles till Kolar. They intercepted the vehicles after the car carrying the logs got punctured near Nerlahalli village in Karnataka.

Six youth, including four hailing from Karnataka and two from Chandragiri mandal in Chittoor district, were nabbed. The seized logs and vehicles were brought to the task force office in Tirupati.

Task force Deputy SP K.C.Venkataiah said the accused were produced before the Tirupati court on Tuesday and remanded. Some key people of the smuggling syndicate have also been identified in Karnataka and efforts are on to trace them, he said.

In another incident, forest officials of the Chittoor West division nabbed two operatives hailing from Tamil Nadu and seized logs worth ₹50 lakh, and a mini lorry. According to Forest Range Officer (Punganur) Balakrishna Reddy, forest guards spotted the mini lorry, with around 50 persons on board, moving towards Karnataka in the early hours. They intercepted it at Jendaman cross junction near Piler.

A majority of the operatives managed to flee while two of them, both natives of Tamil Nadu, were nabbed. A case has been registered and Investigation is on.

Meanwhile, the task force officials nabbed two more operatives hailing from Tamil Nadu at Nagapatla beat when they were trying to cross into the Seshachalam hills near Chandragiri. Seeing the combing party, several operatives fled. The police seized axes and provisions meant for camping in the forest. 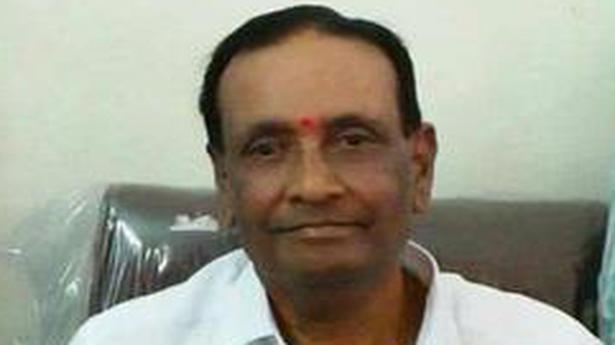