The door delivery of ration through dispensing vehicles has gathered steam as more than 15 lakh beneficiaries have been provided quality rice during the last 15 days. The authorities say that around 27 lakh beneficiaries living in urban areas are targeted to be covered under the scheme and the mobile dispensing units (MDUs) are set to reach out to rest of the beneficiaries in the next week.

Chief Minister Y.S Jagan Mohan Reddy recently launched the scheme as part of which 9,260 vehicles have been deployed to supply quality rice at the door step of the beneficiaries.

“We are happy that we have overcome the teething problems. The coordinating committees at the mandal, division, and district levels are monitoring the distribution through 2,067 custom-made vehicles,’’ says Civil Supplies Commissioner Kona Sasidhar. Now, the drivers are collecting bags of rice from the dealer at 7 a.m. and are available in the streets for its distribution by 8 a.m. Loudspeaker announcement will be made and the ration will be supplied to every door.

“Every vehicle has a key register which conveys the time of the delivery to the respective ward/village volunteers. The cards which are yet to be mapped will be included in the common pool so that beneficiaries can collect ration from any vehicle. In case the authentication of beneficiaries fails, ration can be distributed through the fusion finger process of the e-pass machines. We are also using e-KYC system to supply ration after obtaining the fingerprints of beneficiaries,” explains Mr. Sasidhar. The Civil Supplies Department has also introduced an offline method to distribute dry ration in areas which do not have cellphone connectivity. The department ensured that stocks are kept at the village/ward secretariats and the beneficiaries can collect the ration between 6 p.m. and 7 p.m. For migrant labourers, the department has allowed portability system to get ration from their nearest ration shop after 7 p.m. COVID has taught us an important lesson: SP 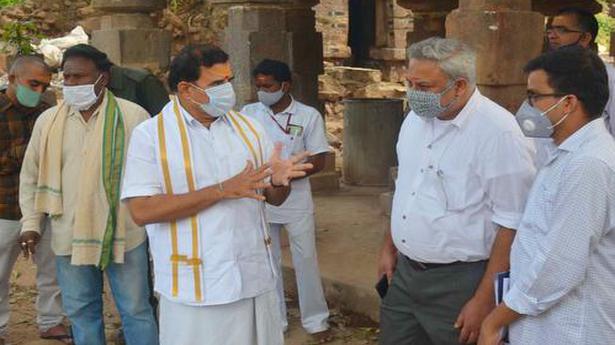 Srisailam temple ties up with U.S. firm for remodelling