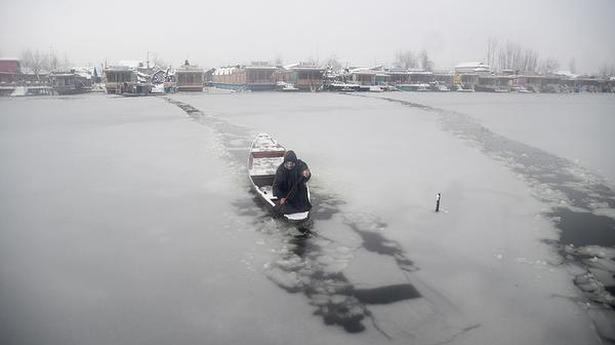 
Two persons died and over 100 houses were damaged in snow in the Kashmir Valley on Wednesday. The Valley remained out of bounds for the fourth straight day, while 22 stranded families were rescued and shifted to safer locations.

An official said a CRPF sub-inspector H.C. Murmu died after a structure collapsed under the weight of snow and hit him at the residence of a former legislator in the Hazratbal area here.

Rehami Begam, 70, from Shah Mohalla at Trehgam in Kupwara, died after snow accumulated on the house roof fell and buried her in.

A police spokesman said 22 stranded families were rescued and shifted to safer locations in Kulgam.

“The families were living in the avalanche-prone areas in the upper reaches of Merasinallah-Kraloo -Kund and Kanchloo-Kund,” the police said.

Scores of patients and the families of the dead also faced immense difficulty due to snow accumulation. According to official figures, Kashmir recorded one to six feet of snowfall in the past four days in the plains of the Valley.

“In Sopore, police helped a stranded vehicle carrying the body of a woman on the Hadipora Rafiabad road. The police also rescued ailing patients and pregnant women and shifted them to hospitals,” the police said.

Over 100 houses have suffered damages, with many structures caving in in Srinagar, Kupwara, Shopian and Bandipora due to snow accumulation.

“Around 76 houses, which suffered damage to their roof-tops, were provided an immediate assistance of ₹5,200 each, three houses damaged in the snowfall were sanctioned an amount of ₹3.05 lakh,” Deputy Commissioner, Srinagar, Dr. Shahid Iqbal Choudhary said.

Air and road traffic, connecting the Valley with the rest of the country, has remained closed.

An official said the air traffic is likely to resume on Thursday but the highways will remain closed for traffic.

Most roads connecting villages and urban centres have remained closed due to the snowfall, which started on January 3.

“The deputy commissioners have been asked to put all available resources in service to restore all the affected services like roads, transport, power and water supplies besides hospital supplies in their respective districts,” Divisional Commissioner, Kashmir, P.K. Pole said.

The meteorological department has predicted “improvement in weather from Thursday and decrease in snowfall”.

“People living in these areas have been advised to take precautions and avoid going to the vulnerable areas or to remove snow from their rooftops to avoid loss of lives,” a DMA order said.

Violent clashes mar run up to by-polls in Manipur