The district reported 266 COVID-19 cases on Monday. It also recorded one COVID-19-related death.

An official bulletin issued here today said among the fresh cases, 263 patients contracted the disease through local transmission, while the source of infection of two persons remains unidentified.

One person who came from abroad, also tested positive for SARS-CoV-2.

Meanwhile, 531 people who were undergoing treatment for the disease in the district recovered.

The active COVID-19 caseload in the district stands at 4,305, the bulletin adds.

As many as 145 people tested positive for SARS-CoV-2 in Kottayam on Monday Of the fresh cases, all but one contracted the disease through local contact. The fresh cases also included 11 children and 21 people aged above 60. With 37 cases, Kottayam municipality led the tally, followed by Ettumanur with 11 cases. With 861 recoveries the district currently has 4,161 active cases.

As many as 97 people tested positive for SARS-CoV-2 in the district on Monday.

Of the fresh cases, 94 people contracted the disease through local contact and among these, the contact source of seven cases were yet to be identified.

Among the local bodies, Ezhamkulam reported 13 cases, followed by Kaviyoor with 10 cases. The disease claimed three more lives in the district and the victims were identified as a 85-year-old Thiruvalla native, 58-year-old woman from Kalluppara and 55-year-old Chittar native.

With 582 recoveries during the day, the district currently has 5,114 active cases.

(With contributions from our bureaus in Kottayam and Pathanamthitta)

New high of 589 cases in Kollam 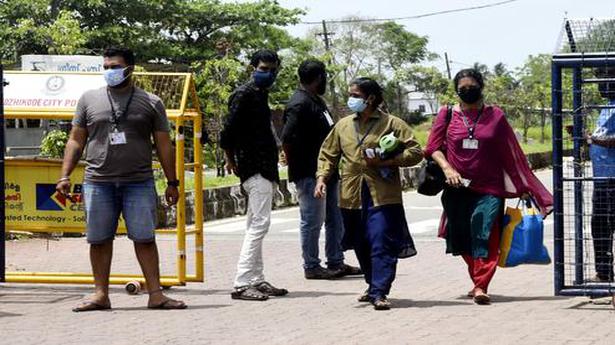