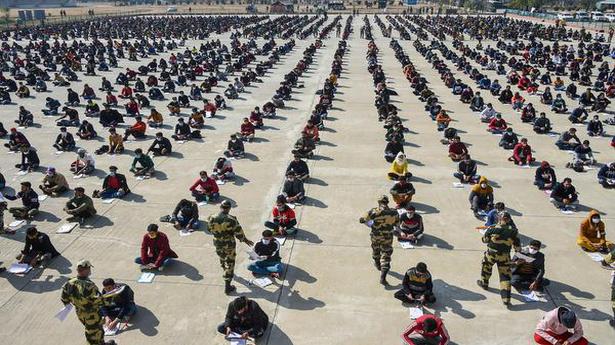 The written test of the candidates, hailing from 20 districts of Jammu and Kashmir and two districts of Ladakh, was conducted smoothly at various centres amid strict adherence of COVID-19 protocols.

Around 30,000 candidates on Sunday participated in the written examination for recruitment in the Border Security Force (BSF) and the Central Industrial Security Force (CISF) in the Union Territories of Jammu and Kashmir, and Ladakh, a BSF spokesperson said.

The written test of the candidates, hailing from 20 districts of Jammu and Kashmir and two districts of Ladakh, was conducted smoothly at various centres amid strict adherence of COVID-19 protocols issued by the Centre and the two UT governments, he said.

The spokesperson said a total of about 34,000 candidates, who have been declared qualified in physical Endurance Test and Physical Standard Test and documentation were called for the written examination for the recruitment to the post of male and female constable (General Duty) in the BSF and the CISF.

“There was huge enthusiasm among the candidates in not only Jammu but also in Kashmir and Ladakh regions. The percentage of absentees was very low,” he said.