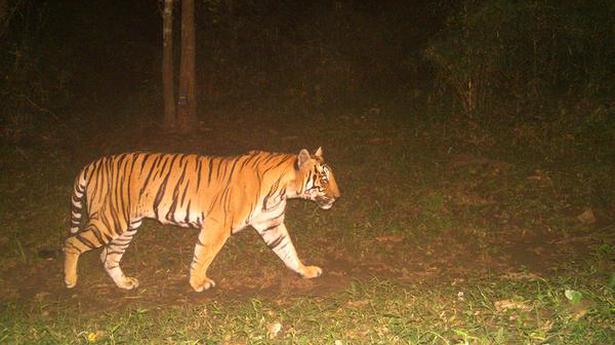 
A survey held at the Parambikulam Tiger Reserve in Kerala in recent weeks identified 35 tigers, indicating an increase in the apex predator population.

Of the 35 individuals identified, 22 were found in the last year survey and 13 were new. Two cubs were noted during the estimation with camera traps, said S. Vysak, Deputy Director of the reserve.

Mr. Vysak said the survey was conducted as the fourth phase of the monitoring programme initiated by the National Tiger Conservation Authority (NTCA).

“The early indications from this survey would go a long way in the long-term management and conservation and protection of tigers.”

The 40-day intensive monitoring had deployed camera traps in a grid pattern with one pair in every two sq. km. The survey included the entire core area and buffer zones of the reserve. The tigers were identified from their unique stripe pattern.

“Unlike elephants, identifying tigers is easy as each tiger will have a unique stripe pattern. That’s how we identified 22 tigers found in our camera traps in last year’s monitoring,” said Mr. Vysak.

The survey also found that Parambikulam has an estimated density of 2.43. In other words, there will be 2.43 tigers within 100 sq km. “We used spatially explicit modelling approaches to analyse the camera trap survey to find out the density,” he said.

According to Mr. Vysak, the existing density in Parambikulam was because of continued security, effective habitat management, tight control on wildfire incidents in the last 10 years, intact connectivity of habitats and minimal human intervention.

“Although we could find the movement of many other animals, including a large number of leopards, the human disturbance was considerably less,” said Mr. Vysak. “COVID-19 restrictions could be one of the reasons for the decrease in human movement within the tiger reserve.”

The Wildlife Institute of India (WII) and NTCA jointly developed survey methodology after consultation with conservationists and wildlife experts.

CS for speeding up process of free water supply

Centre’s lack of plan to evacuate Indians from Afghanistan is a gross abdication of duty: Congress spokesperson Randeep Surjewala