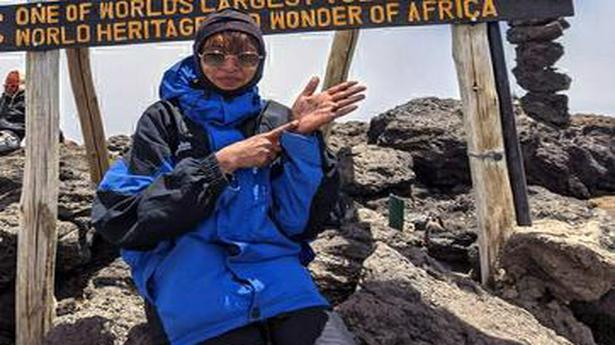 K. Sarada could be the first vegan from the country to achieve the feat

Kuragayala Sarada (44), hailing from Bapatla, has conquered Mount Kilimanjaro — the tallest mountain in the African continent and the highest free-standing mountain in the world.

While Ms. Sarada’s feat is extraordinary, it is all the more unique as she could be the first Indian vegan woman to make it to the top of the summit.

“The whole trek was an exciting experience. I got to learn a great deal about the culture and people here. This trek wouldn’t have been successful without everyone who helped me back home and here,” said Ms. Sarada.

Ms. Sarada studied in Bapatla till her Intermediate and later moved to Hyderabad where she obtained a degree in journalism.

The mountaineer is keen on promoting veganism. “I decided to become a vegan once I understood the torture that animals are subjected to in the dairy, meat, leather and wool industries. But there are things other than the pain and suffering of an animal that pushed me to stick to a vegan diet. We need veganism because it aids in a better environment. It helps in reducing carbon emissions, better land and water management, and helps attain a rich biodiversity,” Ms. Sarada said.