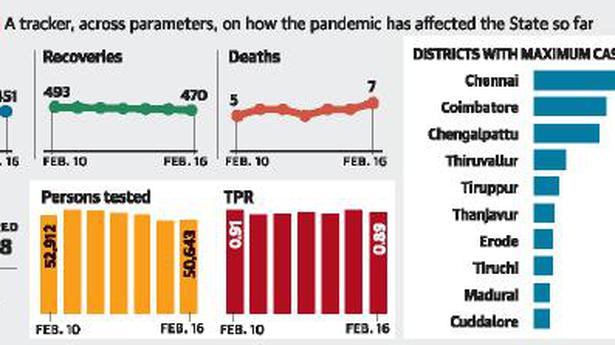 
Another 451 persons tested positive for COVID-19 in Tamil Nadu on Tuesday. While 470 persons were discharged, seven more succumbed to the infection.

Two persons died in Chennai, while Chengalpattu, Krishnagiri, Tiruvallur, Thoothukudi and Vellore recorded one death each. All of them were aged above 60 and had co-morbidities. A 64-year-old man from Tiruvallur, with diabetes and hypertension, was admitted to the Rajiv Gandhi Government General Hospital (RGGGH) on February 13. He died the next day owing to COVID-19 pneumonia, respiratory failure, septic shock and acute kidney injury. A 67-year-old man from Chennai, who had coronary artery disease, died at the RGGGH on February 14 owing to COVID-19 pneumonia, respiratory failure and moderate left ventricular systolic dysfunction.

In the last 24 hours, 50,800 samples were tested. So far, 1,68,63,820 samples have been tested. A private laboratory — Primegen Healthcare Laboratories Pvt. Ltd., Madurai — was approved for COVID-19 testing recently.

There are 187 testing facilities in the private sector and 68 in the government sector.

The samples of two more U.K. returnees, who had tested positive for COVID-19, returned positive for the U.K. variant of the novel coronavirus following Whole Genome Sequencing at the Institute for Stem Cell Science and Regenerative Medicine, Bengaluru. According to the Health Department’s bulletin, so far 11 persons — eight U.K. returnees and three of their contacts — tested positive for the U.K. variant. One of the U.K. returnees was under treatment in a separate isolation ward, and the remaining 10 persons tested negative in the follow-up RT-PCR test as per the Standard Operating Procedure. They were discharged and kept in home quarantine.

On Tuesday, 21,029 persons were vaccinated against COVID-19 in the State. 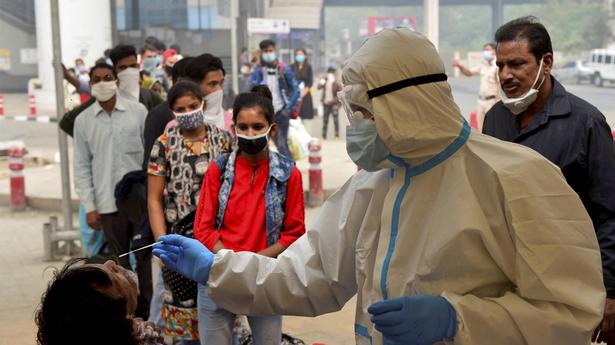 Karnataka HC declines to stay use of Aarogya Setu app 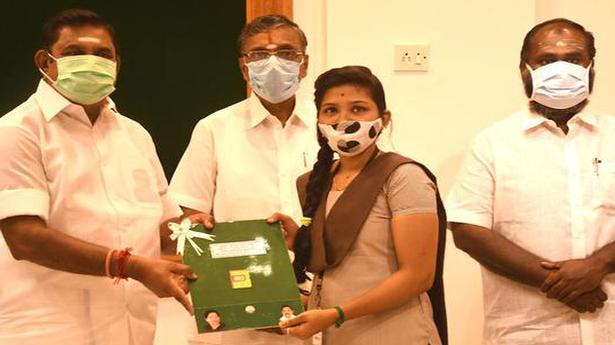