Counting of votes was still going on when the reports came in last but the trends indicated that the candidates supported by the ruling YSRCP were ahead in a majority of the seats. Since the elections were being fought on non-party basis, both YSRCP and TDP backed their respective candidates.

As results started coming in, supporters of the YSRCP celebrated at the party office in Tadepalli.

Vijayawada Special Correspondent adds: The State Election Commissioner (SEC) Nimmagadda Ramesh Kumar has expressed satisfaction on the completion of the first phase elections to gram panchayats in the State, on Tuesday.

In a statement, Mr. Ramesh Kumar said there was a very large turnout of voters with enthusiasm, to exercise their franchise. The election process had been, by and large, peaceful compared to the previous polls, barring a few stray incidents, he said.

The SEC applauded the efforts made by the Collectors and district election authorities, Superintendents of Police and the Observers and complimented the poll staff for their zeal and diligence. He also complimented the police personnel for the excellent security cover provided.

Mr. Ramesh Kumar said he was hopeful of the same to continue in the subsequent phases also and added that he viewed the Tuesday’s poll as a good beginning and omen to strengthen the democratic processes and the grassroot institutions. 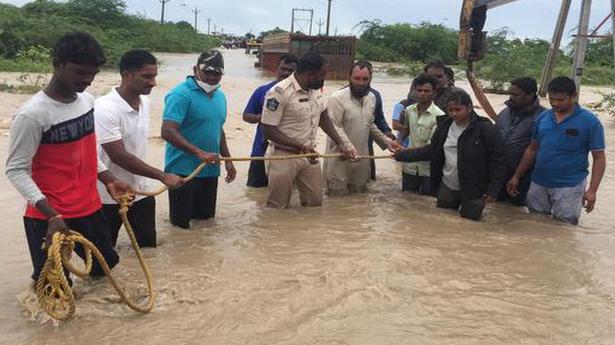 Flash floods throw normal life out of gear in Prakasam