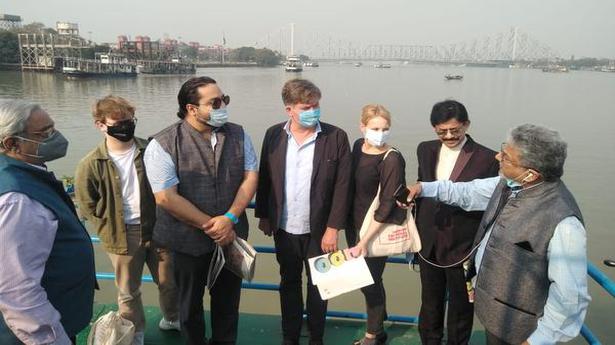 The ride will be available every Saturday and Sunday from February 14.

It is the usually the British structures and settlements in Kolkata that draw a lot of tourists, but of late the other colonial settlements along the Hooghly upstream from Kolkata have emerged as the centre of attraction. The recently restored Danish tavern and other structures at Serampore and the French settlement at Chandannagore have been the subject of much curiosity.

In an attempt to make these places more accessible West Bengal Transport Corporation (WBTC) has started a European Settlement Boat Ride once every week.

The boat ride, both upstream and downstream the river running 11 hours, has a 90-minute stop at Serampore and Chandannagore. “The Hoogly has the unique history of European settlements: Danish, French, Dutch, Portuguese and British who came hundreds of years ago. The river ride celebrates this uniqueness, in an affordable one-day trip where you can learn as well as enjoy,” Rajanvir Singh Kapur, managing director of West Bengal Transport Corporation, told The Hindu.

The ride will be available every Saturday and Sunday from February 14. The initiative has been launched in collaboration of the Danish Cultural Institute India and the Oxford Bookstores. The starting and ending point would be the Millennium Park jetty in Kolkata.

“The area is an important part of our common pre-colonial history — with fascinating stories of exchange not just in trade, but also in culture, literature, art, philosophy and so much more. And going by ferry is the best way of seeing these World Heritage sites. It was after all how the Europeans first came,” Thomas Sehested, Director, Danish Cultural Institute India, said.

Danes acquired land in Srirampur from the Nawab of Bengal in the mid-18th century. Among the Danish structures is the St. Olav’s Church. Locally known as the Danish Church, it was built between 1800 and 1826. Another prominent Danish structure, Danish Tavern, is located on the river front that has been recently restored and is at present back in business.

In Chandannagore, the prominent French Settlement is Strand is a 700-metre-long tree-shaded promenade along the Hoogly River, with some old French mansions and other colonial buildings along the way. The prominent structures are Dupleix Palace which now houses the Chandernagore Museum and Institute.

Rachhpal Singh, Chairman of the WBTC, said that the idea behind the initiative was to make riverine transport experience exciting, affordable and popular among the youth