With the rain accompanying Nivar damaging majority of the roads in the State, including highways, the authorities have identified 3,110 km of roads for repair

Gunadala resident R. Pruthviraj starts early for work these days. It is not because of an increased work load, but the road he uses to commute is barely motorable, forcing a detour which results in longer travel time.

Pruthviraj is not alone in this ordeal inflicted on residents of many localities, where the condition of roads is very poor, especially after cyclone Nivar worsened the situation.

“There has been a sudden increase in the number of potholes in roads around. Stagnant water is not drained properly and inadequate desilting of drains has further worsened these stretches that have become a motorist’s nightmare,” rues Sai Batlapenumarthy of Ayodhyanagar.

Unlike in the past when mostly internal roads would get damaged due to heavy rains or cyclones, this time even the highways bore the brunt of torrential downpour under the impact of Nivar. For instance, in the Hyderabad route, the Gollapudi bypass road and the Chanumolu Venkata Rao bridge near Jakkampudi have gaping potholes, similar is the case with the road stretch near Prakasam Barrage.

“Road maintenance is abysmal leading to accidents, some of them fatal,” says Ch. Babu Rao, senior leader of the Communist Party of India (Marxist).

The local municipal corporation, he says, is focussed only on collecting taxes, shunning the development agenda. “They say wear helmet or pay fine. Now that an increased number of accidents occur due to bad roads, the departments concerned should pay fine to people who are injured, lose their limbs or sometimes even lives due to the road condition,” he says, adding: “Of the 1,200-km length of internal roads in Vijayawada, nearly 40% are damaged.”

The State is well connected through an extensive network of roads and railways and the recent rains have caused damage to a major part of the road network. “We have identified around 3,110-km of road length which are badly damaged and need immediate repairs. Funds to the tune of ₹382 crore have been sanctioned for the purpose,” informs M.T. Krishna Babu, Principal Secretary, Department of Roads and Buildings.

“This is in addition to the already sanctioned ₹150 crore to carry out repairs during the season. So, works worth almost ₹530 crore have been sanctioned, and the works would be grounded during this season, before April,” he says.

The department conducted another survey to identify roads that are not in good condition and needs to be “renewed”. The result has thrown up yet another challenge by revealing that around 7,116-km length of roads need attention to become motorable again. “We need a substantial amount for this — close to ₹2,000 crore — and we want to make it a priority,” said Mr. Babu.

Generating such huge funds is indeed a tall order. But the department has found a way out. The Road Development Cess of ₹1 per litre on petrol and diesel introduced by the Andhra Pradesh Road Development Corporation (APRDC) to raise funds for developing the State road infrastructure, will be utilised for the purpose.

Reluctance on the part of the contractors to participate in the tender process is a setback for the department. Due to pendency of bills, they are not showing interest in taking up new works.

Realising the situation, Chief Minister Y.S. Jagan Mohan Reddy has asked the Finance Department to release pending bills worth around ₹450 crore to facilitate maintenance of State Highways and Major District Roads. The funds are likely to be released next week, paving the way for clearing the old bills of the contractors, who would then take up new works. 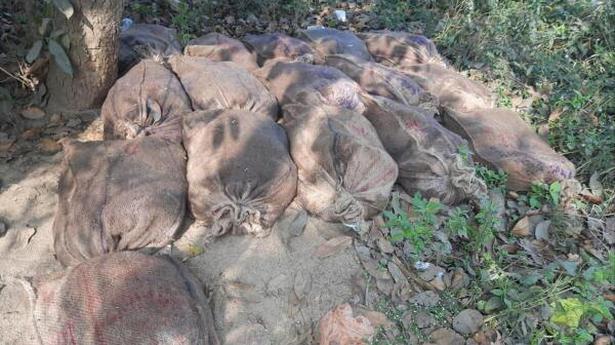 Devotees face tough time as skies open up in Tirumala

UiPath ties up with APSSDC to train youth in robotic skills