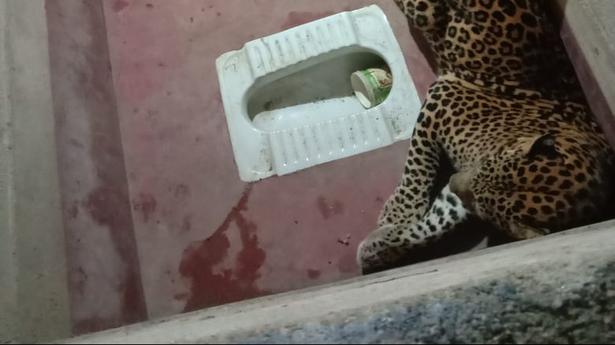 The predator spent hours with its canine quarry in a locked room but made no move to harm it.

For nine hours, they sat across a few feet from each other, neither making a move. Leopard and dog, predator and prey. The cat had chased the stray dog and both ended up in a rudimentary wash room in a farm house in Karnataka. Hearing the commotion, the farm owner locked up both animals together for about nine hours, but finally, the cat made a fleet-footed escape and the dog emerged unscathed.

The adventure near Kukke Subrahmanya on Wednesday surprised Forest Department officials lying in wait to rescue the leopard.

The dog ran into the toilet, pursued by the cat, at the farm house of Jayalakshmi in Kaikamba of Bilinele village, on the fringes of Kidu Reserve Forest, in Dakshina Kannada’s Kadaba taluk. The Deputy Conservator of Forests for Dakshina Kannada, V. Karikalan said Ms. Jayalakshmi heard loud sounds at around 4 a.m. and found the leopard’s tail sticking out near the door. She promptly locked the door and informed the Forest Department.

Forest personnel who rushed to the spot encountered an unusual sight from a window of the four-feet high wash room: the leopard and the dog sat opposite each other, quietly.

Mr. Karikalan said a cage was placed outside the wash room and a net was spread around it. An additional cage and net were also kept standby. A darter and a veterinary doctor were called to the spot. The leopard and the dog were “taking rest” in the wash room, when the personnel closed all openings. Their mission was to make a hole on the asbestos sheet roof and dart the leopard.

As the earthmover moved in, the leopard suddenly jumped towards the roof, bringing down a portion of the sheet. It bolted through an opening not covered by the net, disappearing into the forest in a flash at about 1.30 p.m. The personnel opened the door to find the dog unharmed. The family members then offered the dog some food. Just in case the leopard decided to pay a repeat visit, Mr. Karikalan said two cages were placed near the farm house.