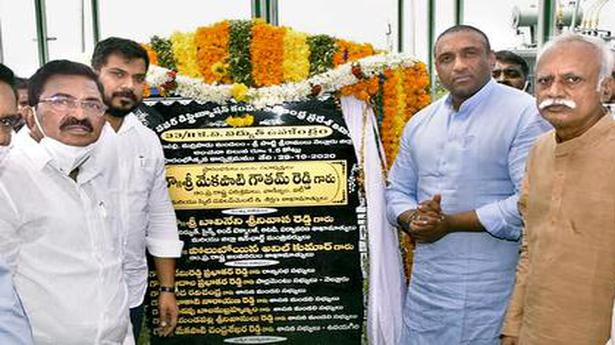 
Andhra Pradesh Industries Minister Mekapatti Goutham Reddy on Thursday said that the government would sign a memorandum of understanding (MoU) with the Johns Hopkins University soon to promote industries in a big way in the State.

The Minister held deliberations with the officials in Nellore district through video link. Representatives of the US-based university had been in touch with the officials of the Industries Department and the Indian School of Business(ISB) would work out the details of the MOU, he said, adding that Visakhapatnam would be developed as a ‘growth engine’ as part of the plans to further industrial transformation in the State.

“The government has a tie-up with the ISB for policy guidance to spur growth in the State and create jobs. The ISB will be involved in shaping the e-governance polices. Besides attracting industries to the State, the government is making all out efforts to promote expertise and set up a policy lab to enable greater synergistic functioning of departments and work towards the objective of economic monitoring, recovery and development,” said Mr. Goutham Reddy.

Among others, Department of Skill Development and Training Special Chief Secretary G. Anatharaman, Industries Department Director J. Subramanyam and representatives of the ISB took part in the meeting.

Later in the day, the Minister, along with his Cabinet colleague P. Anil Kumar Yadav, inaugurated an electricity sub-station. Mr. Reddy said Nellore and its surroundings would attract investments of ₹50,000 crore in the next three years. A MSME park will bne set up at Udayagiri, he added.

Noting that the Somasila reservoir has attained full capacity for the second year in a row, the Minister said that the High Level canal would be ready by 2022.

The two Ministers reviewed the progress of infrastructure development in government schools at Brahamapalli, near Marripadu in Atmakur constituency. Modern facilities were being developed at a cost of ₹25.63 crore in 134 schools, they said, after inspecting the works at Nandavaram Model School.

The Hindu Explains | What can CJI Bobde do about charges levelled against judges by the Andhra Pradesh Chief Minister?