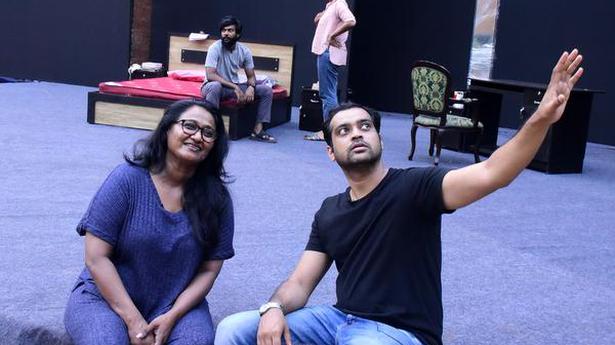 When the curtain goes up on the play “Nothing” at the Gender Park Complex here on Thursday night, it will be another step forward for Kerala towards normalcy. The English drama, directed by the U.K.-based Shakespearean research scholar Lakshmi Krishnakumar, is one of the first major theatre productions being staged in the State after COVID-19 struck Kerala.

The play is being presented on the opening day of the second International Conference on Gender Equality, organised by the State’s Department of Women and Child Development. The premier of “Nothing” could also give another ray of hope for performing artistes, who have been among the worst hit by the pandemic.

“I am glad to associate with a project that gives some relief in these tough times,” Lakshmi, who has her roots in Kottayam, told The Hindu. “I was delighted when I was assigned to do this play.”

The play, a collaboration with the Delhi-based SaMaPa, features a talented cast, including a very known face for the Malayali – film actor and designer Kukku Parameswaran. Mumbai-based Errol Rodrigues, Pooja Mohanraj, and Abhimanyu Nair are the other members of the cast.

Lakshmi, who is pursuing her PhD from LMU, Munich, said the play was about the conversations between a man and his wife. “It focuses on their life in the present day and when they were younger; the word nothing when uttered between two people who share a certain familiarity, closeness or intimacy takes many meanings,” she said. “Because of the COVID-19 restrictions, I could only do a play with a small number of cast and crew. Nothing seemed perfect for the occasion.”

Kukkoo nodded in agreement. “I was fascinated when I read the script,” she said. “The play is very much relevant; it is a wake-up call for today’s woman.”

While this is the first performance on the stage for Kukkoo after the lockdown, Rodrigues has already acted in three plays in Mumbai. “People were a bit apprehensive early on, but now they are more confident to come out to watch performances,” he said. “This is the first time I am going to perform in Kerala; I have heard about the high regard people here have for art.”