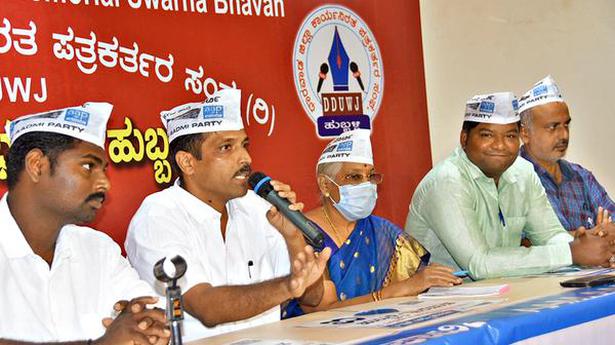 
On Valentine’s Day (February 14) as love birds express their love for each other in different ways, members and office-bearers of Aam Aadmi Party (AAP) will say “I love Hubballi-Dharwad” and take out a foot march to express its commitment towards making the twin cities world class.

Addressing presspersons in Hubballi on Thursday, president of Dharwad district unit of AAP Santosh Naragund said that on Valentine’s Day, hundreds of workers and office-bearers of AAP will take out a padayatra to express their love for Hubballi-Dharwad and will take a pledge to make them world class cities.

Mr. Naragund said that during the time of divisive and communal politics, AAP is pursuing the politics of love and brotherhood, politics of Kayaka (work) and development and within seven years of establishment has given the Delhi Model of Governance to the country.

He said that as part of its ambitious plan to build a world class city, it has already formed a vision group under the former vice-chancellor of Women’s University V.B. Maganur to work out a strategy, while incorporating opinions and suggestions from all quarters in it.

To a query, he said that they were in the process of building the party in the region and plan to field candidates from all wards in the forthcoming elections to the municipal corporation. “In a few wards we have already short-listed candidates,” he said.

Executive committee member of district unit Shashikumar Sullad said that the padayatra under “I love Hubballi-Dharwad” campaign will begin from Kittur Chennamma Circle at 10 a.m. on Sunday and will conclude at around 2 p.m. at Siddharoodh Mutt in Old Hubballi. Unit secretary Pratibha Divakar and others were present.