The searches at the SDPO’s office in Kamareddy were conducted in connection with the arrest of Inspector Jagadish who was accused of implicating a person B. Sudhakar in a false case of cricket betting. Another team of ACB sleuths searched Mr. Laxminarayana’s house in Trimulgherry of Secunderabad.

ACB officials are yet to announce findings of their searches at the SDPO’s office and residence. Meanwhile, the arrested Inspector was shifted from Kamareddy to Karimnagar late on Saturday night to present him before the judge of ACB special court, when reports last came in.

Mr. Jagadish joined police department as SI in 2007. He earlier worked as Inspector of police Task Force in Kamareddy. Along with the Inspector, the ACB officials arrested a civilian M. Sujay who allegedly abetted Jagadish in demanding ₹five lakh from Sudhakar.

The Inspector, through Mr. Sujay, allegedly demanded bribe from Sudhakar accusing the latter of indulging in IPL cricket match betting. Two days later, he registered a criminal case against Sudhakar under sections three and four of TS Gaming Act. The same day, he was released from police station on bail.

In a separate case, Hyderabad range IGP Stephen Raveendra suspended Circle Inspector of Dharur in Vikarabad district Murali Kumar on charge of perfunctory investigation. Recently, Vikarabad SP Narayana sent a report on the Inspector stating that the latter failed to properly investigate the murder of a woman whose decomposed body was found in Kotipalli area.

While the SP was reviewing progress of the investigation into the homicide case, the Inspector allegedly behaved in objectionable manner and refused to answer queries raised by the SP. Meanwhile, Cyberabad Police Commissioner V.C. Sajjanar suspended Chowderguda SI S. Krishna on charge of changing details of a vehicle involved in a road accident case. Mr. Krishna was working at Shadnagar police station then.

Postal ballot facility for the 80+ voters 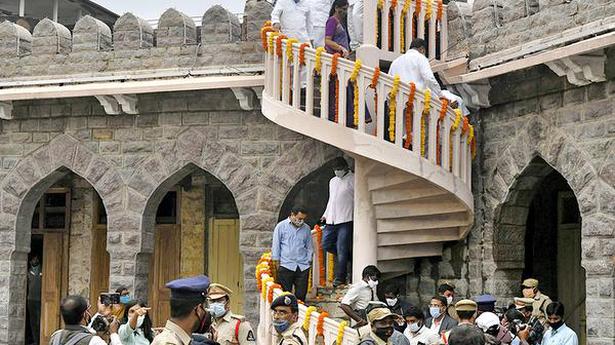