An accused, irrespective of the merits of the case against him, should be granted “default” or “complusive” bail if the investigating agency does not complete the probe within a prescribed time limit, the Supreme Court has held in a judgment.

A Bench, led by Justice U.U. Lalit, referred to how “in England, even a person accused of grave offences such as treason could not be indefinitely detained in prison till commencement of the trial”.

The court held that an accused has an “indefeasible right” to default bail under Section 167(2) of the Code of Criminal Procedure if the probe agency failed to complete the investigation on time.

Under Section 167, an accused can be detained in custody for a maximum of 90 days for a crime punishable with death, life imprisonment or a sentence of over 10 years. It is 60 days of detention if the investigation relates to any other offence. In some special statutes such as the Narcotic Drugs and Psychotropic Substances (NDPS) Act, the period of detention can extend to 180 days.

These time-limits were set to ensure that agencies do not use the ruse of an ongoing probe to keep people behind bars indefinitely, Justice Mohan M. Shantanagoudar, who wrote the judgment for the Bench, observed.

The deadlines in the Section balance the need for sufficient time to complete the probe even as it recognises the need to protect the personal liberty of the accused. Personal liberty is a fundamental right under Article 21 of the Constitution.

“Section 167(2) provides for a clear mandate that the investigative agency must collect the required evidence within the prescribed time period, failing which the accused can no longer be detained. This ensures that the investigating officers are compelled to act swiftly and efficiently without misusing the prospect of further remand. This also ensures that the Court takes cognisance of the case without any undue delay from the date of giving information of the offence, so that society at large does not lose faith and develop cynicism towards the criminal justice system,” Justice Shantanagoudar wrote.

In fact, the top court highlighted that magistrates have to mandatorily inform the accused persons, especially those from the poor sections of the society, of their statutory right to apply for default bail.

Any court, which adjourns an application for bail to favour the prosecution, is acting in violation of the legislative mandate, the judgment said.

The Bench, also comprising Justice Vineet Saran, said Section 167(2) has three clear objectives — fair trial, expeditious investigation and the setting down of a rationalised procedure to protect the poor sections of the society.

The judgment came in an appeal filed by a man accused under the NDPS Act in 2018. He was granted default bail by the trial court after 180 days of custody. But his bail was cancelled by the Madras High Court on the ground that the prosecution filed an additional complaint against him even as his bail plea was being heard.

The top court said an accused exercises his right to default bail from the moment he applies for it in court.

“The right to be released on default bail continues to remain enforceable if the accused has applied for such bail, notwithstanding pendency of the bail application; or subsequent filing of the chargesheet or a report seeking extension of time by the prosecution before the court; or filing of the chargesheet during the interregnum when challenge to the rejection of the bail application is pending before a higher court,” the judgment held.

Two held in Kolkata for smuggling narcotics to Hong Kong 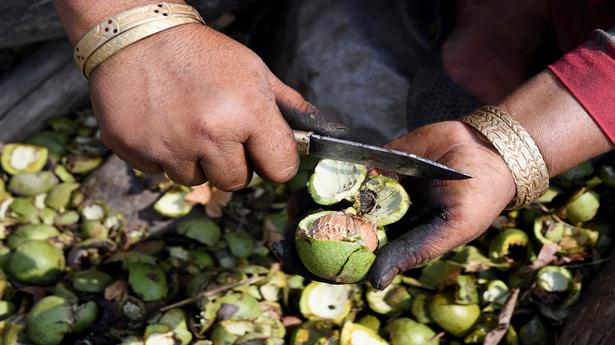 Watch | How are walnuts produced in Kashmir?