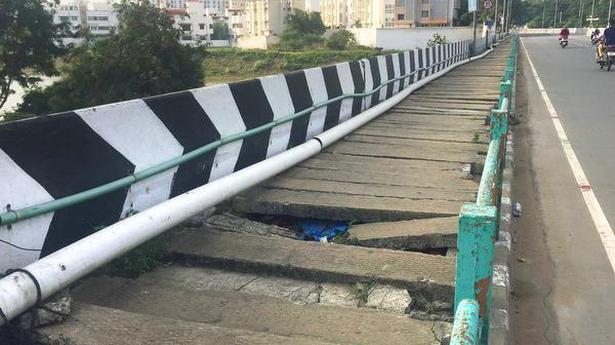 The footpaths, damaged sections of the median and street lights call for immediate attention

It is only two years since it was constructed, but the additional bridge across Adyar river at Manapakkam on Mount–Poonamallee Main Road seems to be carrying the tiresome weight of many years.

Some of the boulders placed on the tiled footpath on the side towards St.Thomas Mount are broken.

The footpath towards Poonamallee does not have tiles, and is instead made up of concrete slabs, most of which are broken and and some are tilted in such a manner as to make the walkway perilously uneven.

Officials of the State Highways Department who are in charge of the bridge point out that Tangedco’s electricity cables runs along the bridge; and, concrete slabs have been placed so that the Tangedco staff would be able to attend to any cable fault without any difficulty. The concrete slabs are just a stop-gap arrangement, they point out.

However, pedestrians say that they find it risky to walk on the uneven footpath.

Besides, steel rods protrude from the median.

Sections of the median on the bridge got damaged due accidents over the past two years. But repairs were not carried out on these sections. As a result, steel rods jut out, posing a threat to the safety of road users.

The State Highways Department started constructing the bridge in 2017 after reassuring the Water Resource Department (WRD) that the existing width of the river and its flow would not be affected.

Before its formal inauguration, the bridge was opened to traffic in October 2018. However, the bridge received LED street lights only in April 2019.

“But many of the street lights are not working. At night, People rely on the headlights of their vehicles to navigate this section,” says S. Prabhakar, a resident of Ramapuram.

Regular road users on this section point out that the bridge is dusty. Sand gets accumulated along the extreme ends of the carriageway on the bridge, which in turn blocks the stormwater-drain inlets on the bridge. Consequently, rainwater stagnates near the ramp of the bridge, towards Poonamallee.