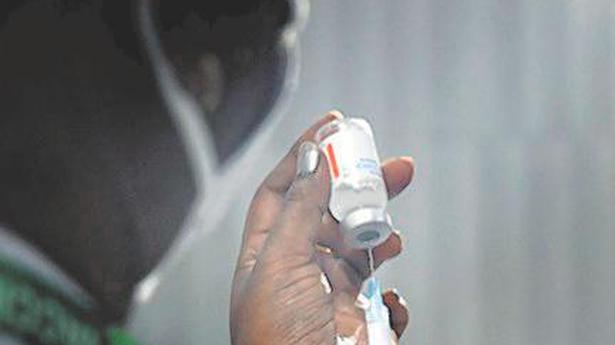 
The number of persons vaccinated in a day crossed 20,000 on Saturday — the first time since inoculation against COVID-19 began in the State. A total of 20,032 persons — 12,284 healthcare workers, 3,351 frontline staff and 4,397 police personnel — received the vaccines on a day when the administration of the second dose of the vaccines took off.

So far, 2,47,372 persons have been vaccinated. The number of health workers who have received the vaccines so far has crossed two lakh. A total of 2,10,430 health workers, 22,756 frontline staff and 14,186 police personnel have been vaccinated. Of the 12,284 healthcare workers immunised on Saturday, 11,130 received the first dose and 1,154 the second. The second dose is administered 28 days after the first. Accordingly, health staff who took the jab on the day of the launch on January 16 received the second dose.

However, only less than half of those who received the first dose on the day of the launch have taken the second one. As per a daily report issued by the Directorate of Public Health and Preventive Medicine, 3,126 health staff received the vaccines on the day of launch — 3,027 received Covishield and 99 received Covaxin.

Health Secretary J. Radhakrishnan, in a communication to department officials, appreciated the vaccination performance and said it was improving every day but as the start was slow in the beginning, there was much to catch up with.

“While many districts have come up with action plans, the worry is that some health unit districts such as Pudukottai, Aranthangi, Ranipet, Tirupattur and Ramanathapuram, among others, are yet to pick up momentum. Chennai too can do better on daily numbers, though in absolute overall numbers it too can improve as well as Coimbatore, Madurai and Tiruchi which have involved the private sector,” he said.

Officials were asked to ensure that defence services lifted the allotment. This included healthcare workers for the Army, Navy and Air Force. They were also directed to eliminate duplicate entries without fail as it would improve the performance, he said, adding that they roughly had 95,000 double entries. He asked the officials to allow walk-in eligible persons to increase usage of vaccine session sites, increase off-take of frontline workers and schedule the vaccination of all healthcare workers and frontline staff, and keep positive advocacy.

“It is a national programme, and if cases increase at any time, we will be blamed for not having vaccinated to our capacity,” he added.

At the Government Omandurar Medical College Hospital, dean R. Jayanthi, who was among those vaccinated on the day of the launch, took the second dose of Covishield, along with a number of doctors, nurses, technicians and other hospital workers. More than 2,000 healthcare workers have received the first dose of COVID-19 vaccine so far at the hospital. No adverse reactions were reported following vaccination and no diet restrictions were required.

Arrangements were made separately for the first and second dose of vaccination on the college premises, a press release said.