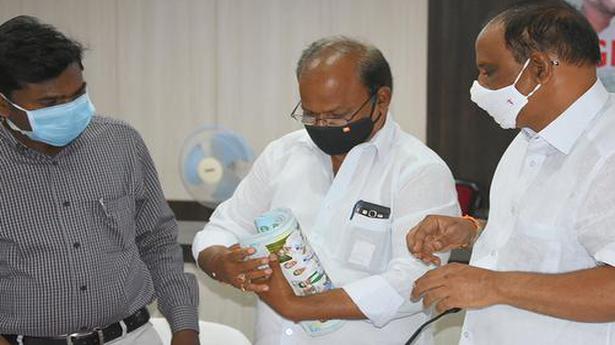 
The first-ever agricultural advisory board meeting organised here on Friday resolved to discourage groundnut monocropping and promote crop diversification in the district, even as many people’s representatives and other stakeholders gave the programnme a miss.

A G.O. was issued on July 14, mandating creation of a three-tier Agricultural Advisory Board at the State, district and mandal levels to advise farmers and the departments concerned on agro-climatic zones, crop diversification, suitable package practices and market intelligence among others.

“Prior to the move, no proper mechanism was available to issue advisories on cropping patterns based on availability of irrigation facilities, agro-climatic conditions, and soil types. Agriculture officials had also been facing difficulties to keep a tab on cropping pattern and acreage at the village and mandal levels. The advisory boards now will put all such issues to rest,” said R&B Minister Malagundla Sankaranarayana, who chaired the meeting.

Lakshmikantha Reddy from Rayadurg, interim chairman of the district board among 10 progressive farmers in the district took part in the meeting. However, no official from horticulture, irrigation, electricity departments, and a majority of MLAs, MLCs, both MPs from the district gave it a miss. MLAs Kapu Ramachandra Reddy, P.V. Sidda Reddy and Thopudurthi Prakash Reddy were the people’s representatives who were present . Collector Gandham Chandrudu initiated the proceedings. Joint Collector Nishant Kumar, the member convener, said the total sown area this kharif has doubled to 6.33 lakh hectares owing to good rain, when compared to that of last year.

Action Fraterna Ecology Centre Director Y.V. Malla Reddy, a member the board, said, “Even as groundnut germination is good this time due to rain, it is deceptive as the crop in thousands of hectares sown in May and June failed to develop pods. Crop sown in July and August are facing problems owing to heavy rain.” 4 thoughts on “Agricultural advisory board bats for crop diversification”