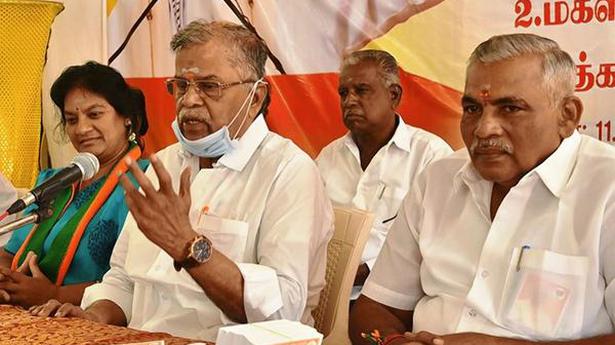 Mr. Ganesan, after attending a BJP workers’ meet in Thoothukudi, told journalists that the ongoing war of words between the AIADMK and the supporters of Ms. Sasikala should be resolved by the ruling party.

This was required as the AIADMK had to weigh her strength and analyse the problems the party would face from her politically, he said.

At the same time, he said the reception accorded to Ms. Sasikala on her return to Tamil Nadu from Bengaluru, where she was jailed in a corruption case, should not be construed as a warm gesture by the people from all parts of the State.

Mr. Ganesan acknowledged that AIADMK leaders were afraid that Ms. Sasikala’s re-entry into the party would also pave way for her close relatives to dominate the party affairs and impose “family rule”.

“The AIADMK does not want this unpleasant situation to happen again. The BJP, an ally of the ruling party, has no role in the rapprochement. If they want to be unified, they can be and we want to see the AIADMK as a unified and strong party,” Mr. Ganesan said.

Lauding the efforts of Chief Minister Edappadi K. Palaniswami in neutralising all efforts made to topple his government, the BJP leader said he, by ensuring unity in the party, had won the people’s trust.

On some DMK leaders visiting temples and receiving the vel (spear) as memento from party workers, Mr. Ganesan said the DMK, a party of atheists, would not be pardoned by the people, even though it was striving hard to showcase itself as a party close to the Hindus.

Govt. to rebuild walls for places of worship