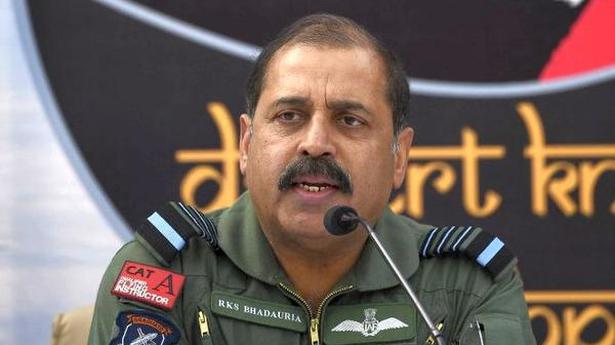 
In the long run, the ability to develop and maintain technological edge or develop asymmetric capability, particularly against China, should be the focus area, said Chief of the Air Staff Air Chief Marshal (ACM) R.K.S. Bhadauria on Tuesday, stressing that this was only possible when the nation had indigenous equipment and home-grown technology in the long run.

“With our northern and western borders being volatile and active, the possibility of a full-fledged war always exists. And as a nation, we must be prepared, and as an Air Force, we must be prepared and capable of handling any form of conflict,” said ACM Bhadauria speaking at a webinar by the Centre for Air Power Studies.

With the reduced U.S. forces’ footprint in Afghanistan, an increased Chinese push into Indo-Pacific and a realignment of West Asia, the security situation for India was becoming increasingly complex, he pointed out.

Stressing on indigenous technological developments, ACM Bhadauria said that because of the extended timelines in procurement of imported technology or systems, by the time they fructified, “our adversaries who have heavily invested into Research and Development (R&D) and indigenous technologies would have raced ahead.”

“So the most important and crucial aspect for future capability-building for us is indigenous R&D and indigenous development be it platforms, weapons and sensors,” he urged.

Last week, the IAF awarded a contract to Hindustan Aeronautics Limited (HAL) for 83 Light Combat Aircraft (LCA) Tejas fighters, taking the total number of these indigenous fighters to 123. The IAF has also fully endorsed the LCA-MK2 and the fifth generation Advanced Medium Combat Aircraft (AMCA) under development by the Defence Research and Development Organisation (DRDO).

The Air Chief said the IAF was supporting development of futuristic technologies such as swarm drones and flying wingman concepts while supporting other technological advancements.

Underscoring the importance of air power as a primary responder in case of crisis, ACM Bhadauria stated that in the past, the rise and fall of nations was dictated by the size and prowess of their armies and navies. “However, conflicts in the last few decades have clearly established, without doubt, the pre-eminence of air power for almost all operational contingencies,” he observed.

“The contours of recent conflicts and attacks reflect future wars and bring out the biggest lesson that the military strategy of today cannot be based on the erstwhile theories of mass manoeuvre and holding ground,” he said.

“Air power allows us to maintain balance of power and when required alter it quickly to our advantage. Air power provides a degree of assurance in strengthening regional peace and security initiatives, he asserted.