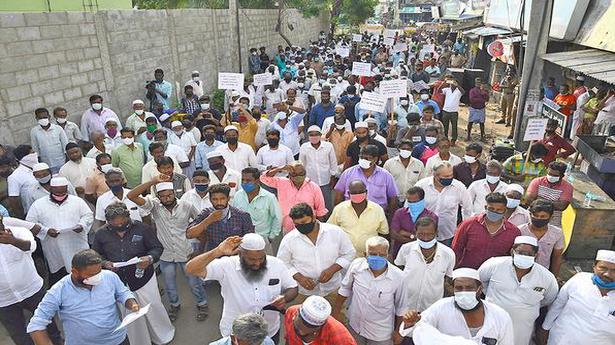 Another independent study is likely to be prepared to ensure that natural habitats will not be affected by the ₹270 crore project to construct an integrated storm water drain (SWD) network in localities along the East Coast Road (ECR), the German funding agency that has agreed to fund the project said recently. However, the Greater Chennai Corporation (GCC), the implementing agency, said it had not received any communication in this regard.

A letter written by Norbert Barthle, MdB (Member of the German Bundestag), Parliamentary State Secretary to German Members of Parliament, and its English translation was circulated in social media. In the letter, Mr. Barthle said construction would not be carried out near the beach, and no payments would be made until this was clarified.

R. Balakrishnan, treasurer, VGP Golden Seaview Residents Welfare Association, Palavakkam, whose association has been fighting against the project, said that the translation of the letter stated the project proponent prepared an extensive study, also including an environmental and social impact assessment as part of the project preparation.

The study concluded that no additional environmental clearance was required because stormwater management projects were exempt by law and the project was not located in a permit-required zone under the Coastal Zone Regulation Notification. These findings were confirmed in 2017 by an independent consultant prior to the signing of the financing agreements and were supplemented by another study, the letter said.

Official sources in the Corporation said they did not receive any such communication. “We have not requested any funding since 2016, the day the agreement was signed by the Corporation and KfW. Till date, we have not sought any transfer of funds,” sources said.

This work was taken up based on a retroactive financing agreement that after the civic body incurs full expenditure, it would be reimbursed after producing bills, sources added. “Till date we have not paid for any of the works as not even 5% of the work has been completed in the project,” the official said.

It may be recalled that five German Members of Parliament had recently written to the German Development Bank, KfW, expressing concern over financing the construction of stormwater drains along ECR, allegedly without assessing environmental impact. This came after a representation from residents of various welfare associations along the ECR, who are against the project.

Who were the Pandavas?