The appointment of R. Ninitha, wife of M.B. Rajesh, former MP of the Communist Party of India (Marxist), as assistant professor in the Department of Malayalam at the Sree Sankaracharya University of Sanskrit, Kalady, has sparked a controversy after one of the subject experts on the interview board alleged irregularities in the selection process.

Ummer Tharamel, Head of the Department of Malayalam and Kerala Studies, Calicut University, who was among the three subject experts on the seven-member selection committee, took to social media to allege that “it was his first experience where the rank list went topsy-turvy”.

He said the appointment of Assistant Professor (Malayalam), however, was not in tune with the rank list given by the board. “Those who got the first two ranks were bypassed to choose the third rank holder for the post,” Mr. Tharamel told The Hindu.

Ms. Ninitha was ranked first on the list of the candidates under the Muslim category. Prof. Tharamel said he, along with the other subject experts, had registered their opposition and criticism of the selection process before the varsity authorities. Ms. Ninitha joined the Department of Malayalam on Wednesday, according to university officials.

Vice Chancellor Dharmarajan P.K. denied the allegations while stating that the selection process was transparent and as per the rules and regulations prescribed by the University Grants Commission.

“Each member on the selection committee was asked to write down the marks won by the candidates. They were later compiled to publish the final rank list,” he said. Asked about the marks won by each candidate, Prof. Dharmarajan said it was confidential and could be revealed only before court, if required.

The Save University Campaign Committee petitioned Governor Arif Mohammed Khan, who is the Chancellor of the varsity, against the appointment. R.S. Sasikumar, chairman of the committee, alleged that the rank list was manipulated to appoint Ms. Ninitha.

The selection process was subverted to recruit CPI(M) cadres and their relatives in several vacancies in Sanskrit University.

Political considerations loomed large over the preparation of the rank list for the post of assistant professor in the Malayalam Department, he said.

The committee urged the Governor to stay the selection process immediately.

(With inputs from Kozhikode bureau) 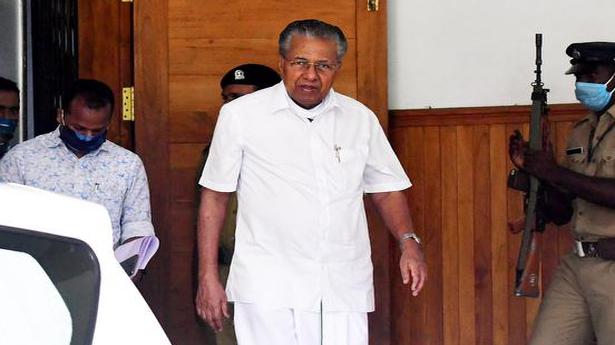 Kerala govt. not to put into effect the Ordinance to curb abusive content

Wait for results to be over today