The immortal keertanas of iconic saint composer Bhakta Ramadasu (Kancharla Gopanna) resonated through the air in Nelakondapalli as scores of artistes and music aficionados paid a rich musical homage to the latter on the occasion of his 388th birth anniversary on Sunday.

A flurry of devotional and classical music programmes were organised by the Bhakta Ramadasu Vidwath Kala Peetham in association with the government departments concerned at Bhakta Ramadasu’s birthplace Nelakondapalli.

Sri Bhakta Ramadasa Dyana Mandiram came alive with rendition of Ramadasu’s keertanas and presentation of vocal concerts by musicians in commemoration of the legendary saint composer of the 17th Century.

Their scintillating performance in the evening session left the audience spellbound and revived the memories of the gifted saint composer, who left behind a rich musical legacy with unflinching devotion to Lord Rama. Palair MLA K Upender Reddy and others attended the ceremony.

Glowing musical tributes were paid to Bhakta Ramadasu by artistes from different parts of the State as well as Andhra Pradesh during the daylong “Vaggeyakara Utsavm” held at the historic Sri Sitaramachandra Swamy temple in Bhadrachalam of Bhadradri-Kothagudem district on Sunday.

The Endowments Department hosted the “Vaggeyakara Utsavam” in commemoration of Bhakta Ramadasu, who built the temple dedicated to Lord Rama in Bhadrachalam in the 17th Century. Bhakta Ramadasu Navaratna Keertanala Goshti Ganam featured the rendition of the soul-stirring keertanas, penned by Bhakta Ramadasu during his incarceration in the Golconda fort. 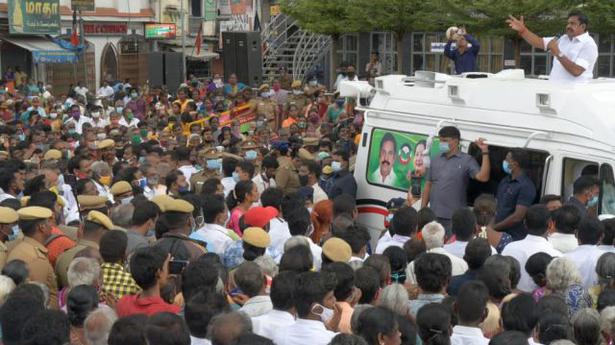 Curbs on celebrations relaxed in Kannur