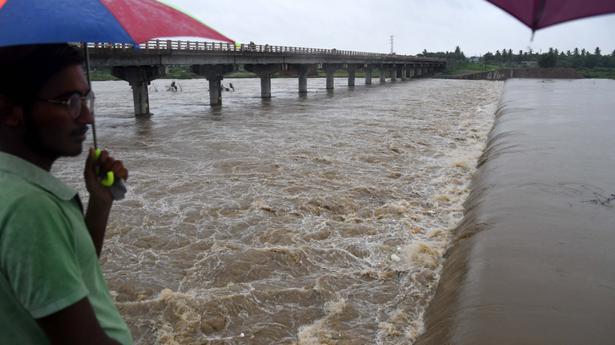 The TRS cadre right from sarpanch to Ministers must work hand in hand with officials to mitigate hardship of people, says K. Chandrasekhar Rao

WIth the Met department predicting very heavy rains in the State for the next two days, Chief Minister K. Chandrasekhar Rao appealed to people to remain indoors as a matter of precaution to save life and property.

A release of CMO quoting Mr. Rao said he asked all public representatives, TRS cadre and officials to be vigilant in view of threat of flooding due to lifting of gates of major reservoirs on rivers Krishna and Godavari in Karnataka and Maharashtra. The TRS leaders and workers in villages and towns likely to be flooded were also asked to be in touch with party office here to coordinate relief operations.

He said there were heavy rains in the catchment of Krishna and Godavari not only in Telangana but the upper riparian States. The crest gates of reservoirs in those States were being opened which was likely to intensify flood in Telangana. Therefore, he asked the Ministers and MLAs to remain in their respective districts and monitor the situation.

The TRS cadre right from sarpanch to Ministers must work hand in hand with officials to mitigate hardship of people, he said.

Another release of CMO said Mr. Rao asked Roads and Buildings Minister V. Prashant Reddy to monitor the situation in erstwhile Nizamabad district, particularly Balkonda constituency where the Sriramsagar project is located, as the flood levels are rising alarmingly in Godavari on account of heavy rains upstream of the river.

He instructed Chief Secretary Somesh Kumar to rush National Disaster Response Force teams to Nirmal town which is already under a sheet of water. He also instructed the Collectors, Superintendents of Police, revenue and roads and buildings officials to take all precautions. The streams and rivulets were overflowing intensely, he noted. Pace of COVID infection slowing down

Forest staff told to get vaccinated