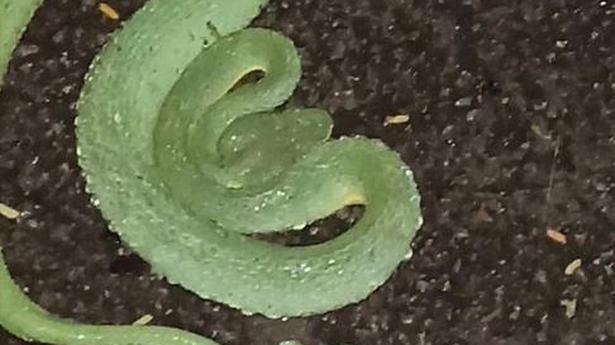 It augurs well as it indicates a remarkable improvement in green cover, say experts

The priests of Lord Shiva temple at Kailasanatha Kona at the foot of the Nagari hills in Chittoor district were taken aback when they sighted a green snake in coils close to a rock cavity of the hill wall on a rainy day in November. At first it was mistaken for the common Indian green vine snake (pasirika pamu). When the reptile made its appearance twice this month, a priest had realised that it was a deadly viper. The forest officials confirmed that it was a bamboo pit viper.

It is for the first time that the species has been sighted in the Nagari hills, a cragged terrain circling the region of Puttur, Nagalapuram and Nagari. Though the hills are known for the regular reptile species like cobra, Indian krait and some other non-venomous snakes, the presence of the bamboo pit viper is a new addition.

Forest officials said that the bamboo pit viper was rarely found in the Eastern and Western ghats, though they are widespread in the northeastern States. Altitudes of 2,000 meters are generally considered congenial for the species to thrive, coupled with wet weather conditions. Making its habitat along the sand beds of rivulets and bamboo groves along the mountain slopes, these viper species prey on aquatic life and also hunt small birds.

As Nagari hills are surrounded by plains and not endowed with any perennial streams or rivulets, the presence of the bamboo pit viper comes as something dramatic. Its presence is also considered a welcome sign for the Nagari hills as an indicator that the green cover has improved remarkably.

Forest Range Officer (Satyavedu) J. Prasada Rao said that the bamboo pit viper was not a regular reptile species to be found in the plains of Chittoor district. “There is a lot of confusion between the green vine snake and the bamboo pit viper. It is difficult to sight both species under camouflage in their habitats nestled amidst green foliage,” he explained.

The official said that recently some residents of a village under the Sri City zone sighted a similar species in a well. Before a rescue team reached the spot, the snake had disappeared into a cavity, leaving a doubt whether it was a green vine snake or a bamboo pit viper.