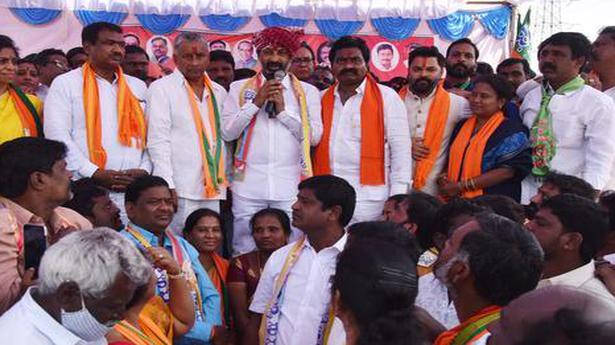 CM remembers BCs only during elections and nothing happens after that, says BJP State president

“This Chief Minister remembers the backward classes only during elections when big announcements are made, government orders are issued and land plots are declared but nothing happens after that. He has the money and resolve to build ‘Pragati Bhavan’ and demolish the Secretariat but has no money for the backward castes’ buildings. Does the CM have no money, land or sand to build the caste bhavans?” he charged at a public meeting held in Uppal Bhagat.

“Not a single building has come up. Are we his slaves? Mr. Chandrasekhar Rao is anti-poor, anti-BC, and against the economically weaker sections of the upper castes. Only a BJP government working for the poor and the deprived classes can do justice and I request all the caste organisations to come under our fold to fight against the TRS government. We are not hankering for power but to work for the poor,” claimed Mr. Sanjay Kumar.

The BJP leader said the BC leaders within the TRS and even the Ministers should hang their heads in shame for maintaining silence despite the injustice being done to the deprived sections. “What has happened to the BC Commission and Federation? There is a big scam in the distribution of sheep and goats. We will expose this government which is a sinking ship like the ‘Titanic’. Like the Centre’s new vehicle scrap policy for 20-year-old vehicles, the TRS too should be scrapped,” he said.

“We need to put an end to this tyrannical rule mired in neck-deep corruption, contracts, land grabbing and commissions. He has also insulted the Telangana people by dismissing the CM’s post which came to him because of the sacrifices made by scores of people for a separate State. Why does he not relinquish it if he’s not respecting the post?” questioned the Karimnagar MP. The BJP party will fight against the land grabbing by the ruling party leaders in every part of Telangana, he added.