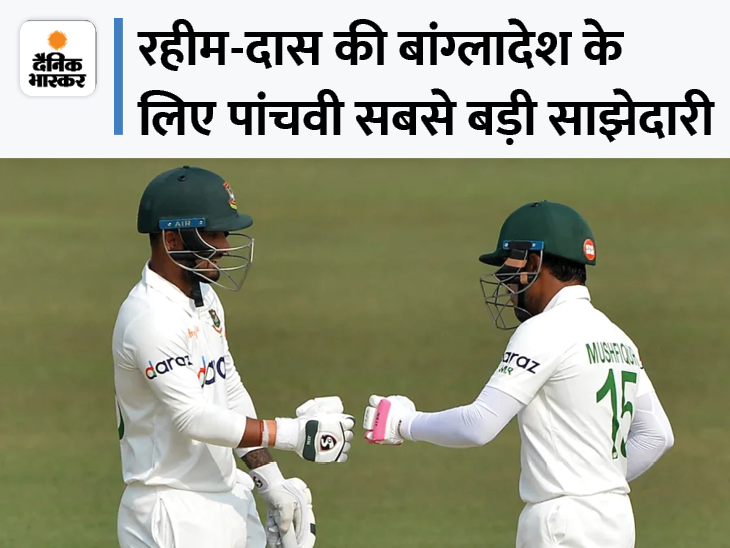 Mushfiqur Rahim and Litton Das shared a record partnership of 253 runs on the first day of the second Test of the two-Test series between Bangladesh and Sri Lanka. In the match being played in Mirpur, Bangladesh had lost 5 wickets for 24 runs in 7 overs at one time in their first innings, but Rahim and Das put up a double century partnership to take their team’s score to 277/5 at the stumps. At the end of the day’s play, Mushfiqur was unbeaten on 115 and Litton Das on 135.

Half of Bangladesh’s team returned to the pavilion in the first 50 minutes
The start of the second Test for hosts Bangladesh did not go well at all. Half of his team returned to the pavilion for 24 runs within the first 50 minutes of the game. Sri Lanka’s Kasun Rajitha and Aseetha Fernando bowled deadly on a pitch helpful for the fast bowlers and took Bangladesh five wickets in the opening 7 overs of the innings. Rajitha got 3 and Aseetha got 2 wickets.

Apart from both Bangladesh openers, Mahmudal Hasan Joy and Tamim Iqbal, experienced all-rounder Shakib-al-Hasan could not even open the account. Najmul Hossain Shanto 8 and captain Mominul Haque also got out cheaply after scoring 9 runs. However, after this Mushfiqur Rahim and Litton Das took over the team in a surprising way.

Thanks to this record partnership of Rahim and Das, Bangladesh’s score reached 277/5 by the end of play on the first day of the second Test. Mushfiqur was at the crease on 115 with 13 fours and Liton Das on 135 with 16 fours and a six.

Dhoni will also be seen in IPL-16: Said – I will play next season, it is necessary for CSK fans to go to Chennai and say thanks