Days after 40 students of a nursing college in Kaval Byrasandra tested positive, another cluster has been found in Bommanahalli zone. As many as 28 residents of SNN Raj Lakeview, an apartment complex in Bilekahalli, coming under Bommanahalli zone, have tested positive for COVID-19, said N. Manjunath Prasad, Bruhat Bengaluru Mahanagara Palike (BBMP) Commissioner, at a press conference on Monday.

The civic chief said that both these were “isolated incidents” and that the BBMP had put in place various measures, including isolating and quarantining those who had tested positive and intensifying contact tracing. Samples have been collected and sent for genome sequencing to the NIMHANS laboratory to ascertain the virus variant.

An order, as per the recommendation of the State’s COVID-19 Technical Advisory Committee (TAC), will be issued making it mandatory for anyone from Kerala coming into the city to possess a negative RT-PCR test report that is not older than 72 hours. Those who do not possess this will be made to mandatorily undergo quarantine and allowed to move out only after they have been tested negative. “While there is no restriction in movement of persons from Kerala, it is the responsibility of the heads of institutions/ colleges to ensure strict compliance. Else, we will initiate action under the Disaster Management Act against them,” he said.

Marshals back on COVID duty

While nearly 200 primary and secondary contacts of the nursing students of Manjushree College of Nursing had been identified, civic officials were in the process of identifying contacts of those who had tested positive from the apartment complex. The contacts have also been isolated and placed under quarantine.

Given that two ‘isolated incidents’ were detected within days, the civic body will continue with its stringent enforcement of mask wearing and social distancing protocols. “Marshals, who had been withdrawn from this duty, have once again been given the responsibility of enforcement,” said the Commissioner, adding that he would once again contact Residents’ Welfare Associations in the city to remain vigilant.

Alternative questions may be offered in CLAT to persons with disabilities 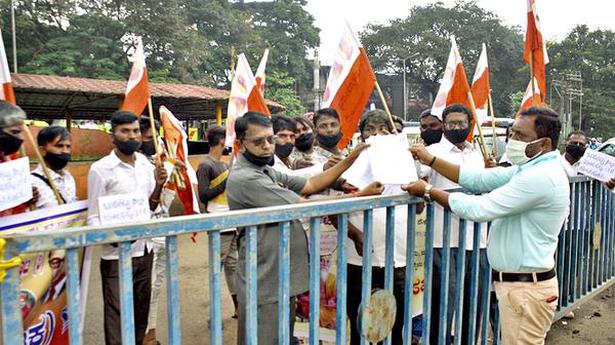