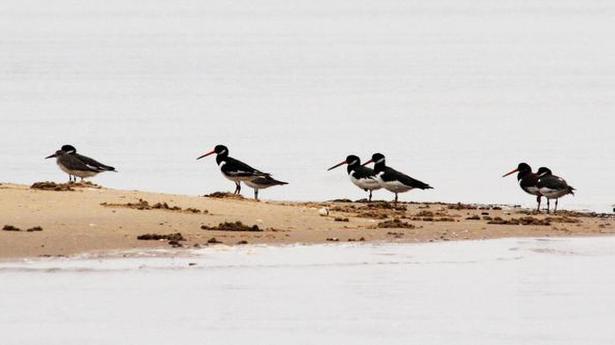 Great knot and Indian skimmer species have been listed in the India’s national action plan for conservation of migratory birds and their habitats (2018-23) in the Central Asian Flyway.

Nearly twenty birdwatchers, led by BNHS experts and renowned ornithologist and wetland expert K. Mrutyunjaya Rao, enumerated the waterbird species in the 12 sites in the Godavari estuary as part of the Asian Waterbird Census-2020.

Speaking to The Hindu, BNHS Assistant Director and Asian Waterbird Census-2020 India coordinator P. Sathiyaselvam said: “A flock of 175 Indian skimmers was sighted on the Kakinada coast during the census. It is the significant finding as it is endangered as per the latest conservation status. A great number of migratory species of great knot was also sighted at a mudflat at Etimoga on the Kakinada coast.”

“We believe that Eurasian oystercatcher, a local migrant, has shifted its habitat from Sacremento Island to the Hope Island. However, further study is required to be carried out on the species,” said Dr. Sathiyaselvam.

The birdwatchers, who participated in the census, have been asked to submit their findings and data by the end of January to prepare the final report on the census.