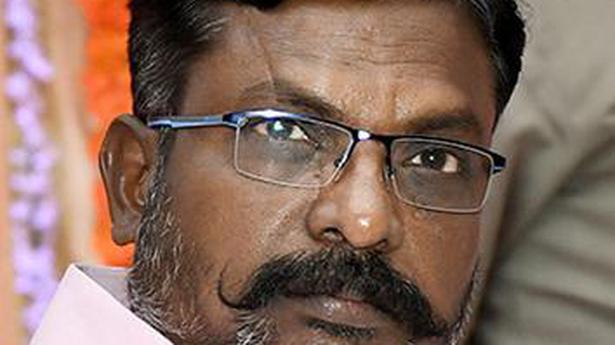 The Sangh Parivar is aiming to have a single party rule at the Centre and the States, says VCK chief

Viduthalai Chiruthaigal Katchi founder-president Thol. Thirumavalavan on Thursday said the Sangh Parivar wants to have a single party rule at the Centre and all the States.

Addressing the CPI’s “political awakening” conference in Madurai, Mr. Thirumavalavan said the BJP was not fighting elections for political governance.

The Constitution-guaranteed reservation had helped socio-economic development of the Scheduled Castes and the Backward Classes. The BJP wanted to break this development, he charged.

“While it is riding piggyback on the AIADMK to win the Assembly election, after the poll, it will threaten the AIADMK MLAs and buy them to make an attempt for a backdoor entry to form the government,” he charged. For this, the party would misuse the Income Tax and Enforcement Departments. This was what the BJP had done in Karnataka and Madhya Pradesh, and was now trying in West Bengal and Puducherry, he said.

The presence of both the major Dravidian parties had successfully blocked the attempts of ‘sanatana’ forces to set foot on Tamil Nadu.

He held the AIADMK government responsible for the death of 13 people in the firing against anti-Sterlite protesters.

Manithaneya Makkal Katchi leader M.H. Jawahirullah said the dictatorship in northern India should not be allowed in Tamil Nadu.

M. Abdul Rahman of the Indian Union Muslim League said the minorities of Tamil Nadu would not fall for Chief Minister Edappadi K. Palaniswami’s promise that the alliance with the BJP was only for electoral purposes and that the party would protect the minorities.

Will Mysuru get Coding Academy on France’s Ecole 42 model?