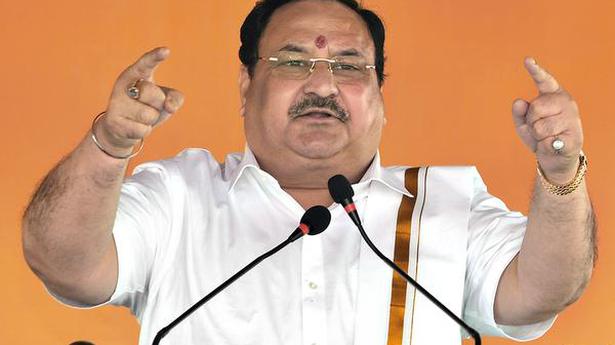 
The Bharatiya Janata Party will get more than 23 seats in the Union Territory in the coming Assembly polls, party national president J.P. Nadda said here on Sunday.

Addressing a public meeting at the AFT grounds during his day-long visit to galvanise the party for the polls, Mr. Nadda said: “We will win 23 plus seats [in the 33-member house with three nominated MLAs] in the polls. Corruption will end and development work will start after the polls.”

The BJP government would take up the revival and modernisation of the textile and sugar mills, disburse pending salaries in public sector undertakings, construct new flyovers and take up railway projects, he said. Thousands of people in Puducherry had benefited from the Centre’s schemes such as Swachh Bharat Mission, Jan Dhan Yojana, Ujjwala Yojana and Ayyushman Bharat scheme, he said.

Accusing the United Progressive Alliance of neglecting the Union Territory, he said when Atal Bihari Vajpayee was the Prime Minister, Puducherry was given a grant of 70%.

“When Chief Minister V. Narayanasamy was a Minister in the UPA government the grant was reduced to 30%. The UPA then waived a ₹5,000-crore loan of Jharkhand but failed to do anything for Puducherry. The region’s debt increased substantially,” he charged.

He also flayed the Congress for not holding the local body elections.