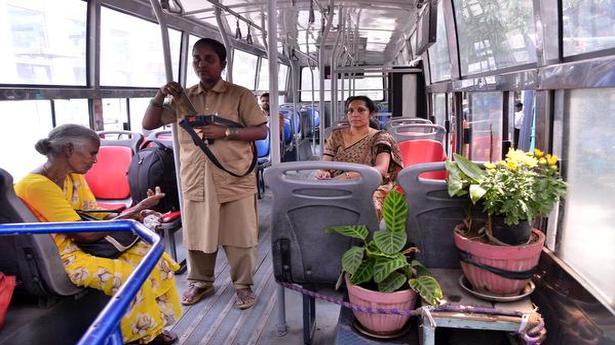 Owing to fewer commuters, BMTC has replaced the shift system with a 12-hour work day

Crew of BMTC buses, who have been spending more than 12 hours at work every day due to the cost-cutting measures introduced during the COVID-19 pandemic, appealed to the State government on Friday to reduce their work hours to eight. Bus crew, especially women conductors, cited lack of infrastructure, such as restrooms and affordable catering services.

In an appeal made through a video message to Chief Minister B.S. Yediyurappa and Deputy Chief Minister Laxman Savadi, who is also Transport Minister, a female conductor said, “There is no eight-hour duty. During rest hours, we cannot go home. There is no restroom for women. We cannot take rest inside the bus. I leave my two-and-a-half-year-old child at home for 12 hours. Please reduce the work day to eight hours.”

After the outbreak of the pandemic, finances of the Corporation were badly hit owing to poor ridership. To ‘better utilise’ human resources and the fleet, the management decided to replace the shift system with a 12-hour work day with 2 to 3 hours rest in between.

The BMTC has around 1,500 women conductors.

A BMTC official said the corporation is going through a tough time. Prior to the outbreak of the pandemic, more than 35 lakh people used to avail its services every day. Now, the number is less than 20 lakh. Earlier, more than 70,000 trips were operated per day, but now the number is down to less than 50,000.

“Considering these factors, we introduced a general shift in a phased manner as per provisions of the Motor Transport Workers Act. This has been done in the interest of both the organisation and employees. Once everything gets back to normal, we will go back to the old system,” said the official.

He added that ridership and revenue generation have remained low. “We are managing to pay 50% of the salary as most of the revenue generated goes towards fuel and maintenance of the fleet,” he said.

The BMTC currently operates around 5,200 out of 6,400 buses. Most of the AC buses are off the road due to poor ridership. Hathras gang rape | In video, victim says she was raped

Tahsildars asked to inquire into candidates getting elected unopposed