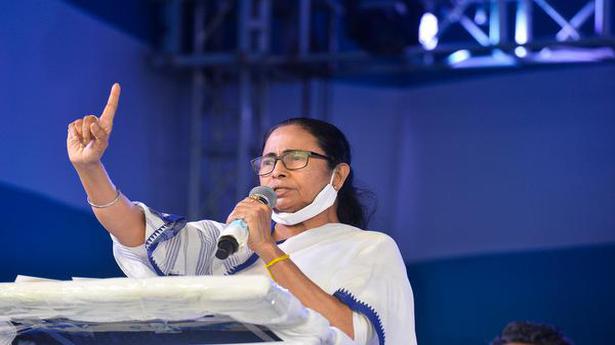 
Describing the Agriculture Infrastructure and Development Cess introduced by the Centre in the Union Budget as a “Jizya tax”, West Bengal Chief Minister Mamata Banerjee on Monday said the BJP government wants to sell the country through the disinvestment proposals.

“Railways sold, ports sold, insurance sold, PSUs 23 more to be sold. They are selling the country.. Why don’t you people sell them… Ask them how much more money they need to leave the country,” Ms Banerjee said, addressing a public gathering at north Bengal.

Ms Banerjee said so many roads had already been built in the State including the new Asian Highway connecting West Bengal with the neighbouring countries. “Why do they want to announce projects ahead of elections? Why was it not done earlier,” Ms Banerjee asked, adding that the cess introduced in the Budget will “finish the people”.

State Finance Minister Amit Mitra called the Union Budget for 2021-22 “directionless and confused”. Mr Mitra said the Budget lacked attempts to create demand stimulation as in the standard Keynesian economic model. “They are selling the government enterprises, railways, seven ports will be operated on PPP model essentially they will be sold,” he said.

Echoing the Chief Minister, Mr Mitra criticised the Agriculture Infrastructure and Development Cess and said the States get nothing when a cess is introduced.

“In case of direct taxes, the States get 41% of the taxes collected. There are reports and studies that 16% of revenue collected in the regime of the present government is through cess,” he said.

The intent in imposing cesses is to undermine the federal character of the country. so that the fiscal health of the States is undermined, he added.