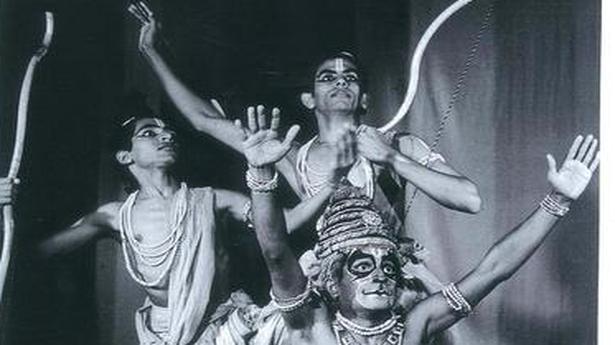 Remembering C.K. Balagopalan, famous for his role as the monkey god, on his first death anniversary

It is one year since the Kalakshetra legend, ‘Hanuman’ Balagopalan, passed away on August 24, 2019, a few days before his 80th birthday (September 4). His departure created a sudden vacuum in our lives. We both walked into Kalakshetra in the Adyar Theosophical Society campus on the same day — October 5, 1953, and we were initiated into Bharatanatyam and Kathakali by Rukmini Devi Arundale and Asan T.K. Chanduppanikkar on October 7 on Vijayadasami day that year.

For both of us, dance was an alien art, except for having watched a few Kathakali performances in our birthplaces — Cheruvattur and Payyanur, respectively, two remote villages in the Kannur district of northern Kerala, then known as Malabar.

Both of us had a brief experience of acting in stage plays with our fathers, who were part-time dramatists and elementary school teachers. Balagopalan’s father was known as Malabar Charlie Chaplin because of his comic roles. So both of us had common grounding and similar upbringing. Thanks to Rukmini amma, we were given full scholarship with free training, boarding and lodging.

When I look back and think of those 17 years that we spent together, living in the hostel and attending classes, I realise there was never any discord or professional jealousy between us.

Though we were of the same age, Balagopalan treated me as an older brother, and I ensured that I was always there for him. Initially, he was not a very serious boy, being a little naughty and playful, unlike me. I had to guide him throughout our time at Kalakshetra. He depended on me to help him revise all the lessons and to make him practise and be prepared before we entered the next day’s class. Sometimes, he escaped from Kathakali or Bharatanatyam classes to play with the Besant School students. I would drag him back from the playground to save him from being pulled up by the teachers, especially Asan Chanduppanikkar, a strict teacher who did not spare the rod.

However, Balagopalan was the darling of the hostel inmates. Like Lord Krishna, he had the knack of drawing all the boys and girls towards him with his charming pranks. Indeed, he was nicknamed ‘Krishna.’ And as luck would have it, he was later cast as Krishna in Rukmini Devi’s ‘Gita Govindam’. He lived the part fully, with Shanta as his beloved Radha. The pair stole the hearts of the audience.

Balagopalan had an amazing stage presence despite his short stature. He could make himself appear tall with his extraordinary histrionic ability. Rukmini Devi had an amazing eye for casting, always picking the right person to play a character. Balagopalan, a born artiste, played many successful roles and gave memorable performances.

Balagopalan had a brief stint away from Kalakshetra in the early 1970s when he took up a job with SIFAS in Singapore, but when he returned, he was reinstated without any questions being asked about why he had left the institution without informing Rukmini Devi. His participation was very valued in the institution’s productions.

He uniformly excelled in all these roles, but he immortalised the character of Hanuman and began to be referred to as ‘Hanuman’ Balagopalan.

I left Kalakshetra in 1968 and established Bharata Kalanjali. Balagopalan was a constant visitor, keeping up our friendship intact. In later years, whenever he visited Shanta and me, he would bring us goodies he had made and fruits from his garden. He was keen that we perform together again in a production. As luck would have it, Apsaras Arts in Singapore made it possible by inviting us to be part of their mega production Aanjaneyam in 2018. Balagopalan was ecstatic and kept saying, ‘Hanuman has answered by prayers.’ Aanjaneyam depicted the meeting of Valmiki and Hanuman in the Himalayas, in which I played Valmiki. His last wish had been fulfilled. Not many people have such a fulfilled life and easy departure in, as the scriptures say, an ‘anayasena maranam.’

Carrying on his legacy

His legacy is being carried forward by daughter Prithvija, a fine Bhartanatyam dancer, who won the best dancer award from The Music Academy. She is now a Kalakshetra staff and member of the Sahrdaya Foundation, headed by Sheejith Krishna, who is mentoring her. Balagopalan always wanted to be a film actor like Sivaji Ganesan, whom he often imitated. Now, his daughter has acted in some Tamil serials and in a Malayalam movie, Shyamaragam, where she played a Bharatanatyam dancer.

Our contemporaries in Kalakshetra then included Krishnaveni Lakshmanan, the late Vijayalakshmi, Prof. A. Janardhanan, M.R. Krishnamurthy (Bengaluru), Kala Ramesh Rao, Ambika Buch, Savitri Jagannatha Rao and the late Narasimhachari. And all of us had the privilege of training under stalwarts like Sarada Hoffman, S. Sarada, Prof. N.S. Jayalakshmi and K.P. Kunhiraman, who assisted Asan Chanduppanikkar. Rukmini Devi’s best creations happened during those days. After retiring from Kalakshetra, Balagopalan continued to participate in the productions. Last year, he was busy practising for Kumarasambhavam that was being revived for the Art Festival. A biography of Balagopalan, titled Leap of Faith, has been written by one of his disciples, Eliza Louis. ‘Balan Anna’, as the students called him, will always be remembered by dance connoisseurs.

The author is a veteran Bharatanatyam dancer, choreographer and guru.