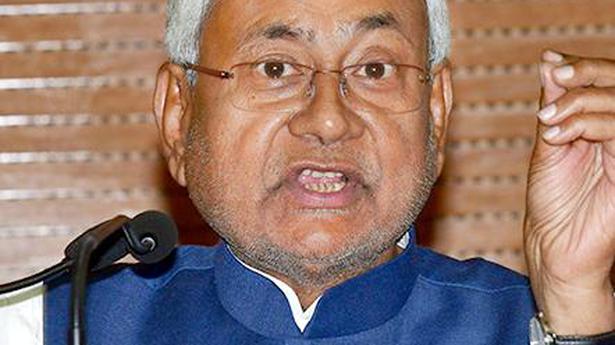 Amid a raging speculation over the delay in Cabinet expansion, Bihar Chief Minister Nitish Kumar on Tuesday said it would be done after the BJP’s proposal, which had not been received yet.

“When the BJP would propose for the Cabinet expansion, we’ll think over it but no such proposal has been received yet”, he told mediapersons “Presently, we’re busy with moving forward of our blueprint for the development of the State for next five years”.

The Cabinet has now 14 members, including Mr. Kumar. In the 243-member Assembly, it could have a maximum of 36 members.

The speculation arose as the JD(U) has been reportedly insisting on having equal number of berths to that of the BJP.

The BJP has seven members, including its Deputy Chief Ministers Tarkishore Prasad and Renu Devi, while the JD(U) has five members and the Hindustani Awam Morcha (Secular) and the Vikasheel Insaan Party one each.

Education Minister from the JD(U) quota, Mewalal Chaudhary, had to resign hours after taking charge after a controversy erupted over an FIR lodged against him in a recruitment scam when he was Vice-Chancellor of the Bihar Agriculture University at Sabour in Bhagalpur.

BJP sources told The Hindu that since the party had got the maximum number of seats (74) among the NDA constituents, it should get more berths in the Cabinet than the JD(U), which had got only 43 seats.

However, JD(U) leaders have been claiming that the party suffered in winning more seats because of another NDA constituent, the Lok Janshakti Party, which had put up candidates against them.

“We lost over 30 seats because of LJP candidates against us and the BJP did not rein in NDA partners from doing so”, rued a JD(U) leader and former minister, preferring anonymity.

Meanwhile, prospects of senior State BJP leaders and long-time ministers in previous the NDA governments like Nand Kishore Yadav, Prem Kumar and others to become ministers again appeared to be less, as they were recently appointed chairpersons of different committees of the Assembly.

Names of some young party MLAs like Nitin Navin, Sanjiv Chaurasia and others have been doing rounds in political circles as possible ministers in the next Cabinet expansion.