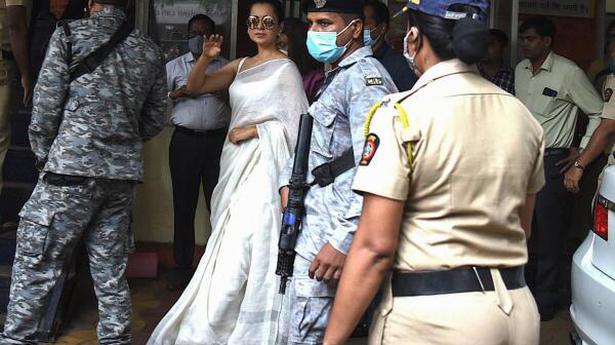 
The Ministry of Home Affairs (MHA) has said it was difficult to determine and compile the precise expenditure incurred on providing security to Bollywood film actor Kangana Ranaut or any other individual.

In response to an application filed under the Right to Information (RTI) Act by Jammu resident Rohit Choudhary, the MHA said, “It is stated that with regard to expenditure on providing security to any individual (including Ms. Kangana Ranaut) is not compiled by us.”

Ms. Ranaut whose two tweets regarding the ongoing farmers’ protest were recently deleted by Twitter for violating the platform’s rules, was accorded ‘Y’ category VIP security by the MHA on September 7 last year.

Y category entails that the individual will be protected by 11-12 personnel round the clock. In her case, it was decided to provide security cover by the Central Reserve Police Force (CRPF).

The MHA’s reply added, “Secondly, it is difficult to determine it precisely as it includes salary and allowances to security personnel, communication, transport vehicles etc. which are accounted for under respective budget heads of different security agencies, under different heads. Moreover, State governments also incur expenditure on security as primarily the State governments are responsible for providing security to individuals on tour in their State/UT (area of jurisdiction). These accounts are neither complied nor available centrally. Hence, it is difficult to ascertain the expenditure on security.”

Industrialist Mukesh Ambani, who was accorded CRPF’s Z category security cover in the year 2014, pays around ₹20 lakh per month to the government.

In reply to a question in Rajya Sabha, the MHA had said in 2014 that “security by Central Government is mostly provided to individuals who are ordinarily resident or based in Delhi. Such security is provided on the basis of threat attached to the posts held by them and/or the level of threat to them as assessed by the central security agencies.”

Ms. Ranaut was provided all-India security cover while she was at her home in Himachal Pradesh last year. At the time she was engaged in Twitter spats with the ruling Shiv Sena government in Maharashtra after the death of actor Sushant Singh Rajput.

According to a report prepared by the Bureau of Police Research and Development (BPR&D), the police think tank of the MHA, more than 20,000 additional policemen than the sanctioned strength were deployed in VIP protection duty in the year 2019.

As per the report, “Data on Police Organisations, 2019”, as many as 66,043 policemen were deployed to protect 19,467 ministers, members of Parliament, judges, bureaucrats and other personalities in 2019, compared to 63,061 policemen for similar duty in 2018. The sanctioned strength for the such duty was 43,566 policemen. Draft plan for tourism in Udupi district getting ready