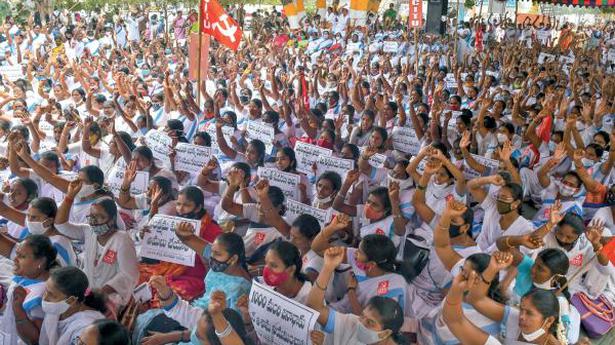 They have been working tirelessly at the community level taking up door-to-door surveys and kicking up awareness campaigns. After the outbreak of the COVID-19 pandemic, they got busy in contact-tracing and making arrangements at quarantine or isolation centres where the COVID-infected persons were shifted to contain the virus.

This is in addition to their regular duties of accompanying pregnant women to health centres, keeping track of their immunisation, making home visits for new-born care and following up on their health progress.

The all-women brigades of Accredited Social Health Activists (ASHAs) and the Anganwadi Workers and Helpers, who protect the most vulnerable groups from ill health and malnutrition, are angry over the raw deal meted out to them and have resorted to a series of protests, demanding effective redressal to their immediate problems.

The State has around 42,000 ASHAs who have been playing a crucial role in decentralising health care and strengthening the primary health system. Their contribution to the increase in institutional deliveries, immunisations and decline in maternal and infant mortality cannot be disputed.

“We have been asking the government to regularise our services, an increased budget allocation to the National Health Mission (NHM) by the Centre, payment of the arrears of monthly ‘corona allowance’ of ₹1000 from January 2020 to June 2020, insurance cover to the workers who died of COVID-19 and implementation of welfare schemes for the fraternity,” says Dhana Lakshmi, general secretary of the AP ASHA Workers’ Union.

Retirement benefits, labour codes and immediate measures to stop forcible administration of covaxin to health activists are their other demands. Citing the demise of B. Vijayalakshmi, an ASHA worker from Penumaka village in Guntur district, who died recently in the Guntur General Hospital after she was vaccinated, Ms. Dhana Lakshmi says the government agreed to announce an ex-gratia of ₹50 lakh to the kin of the deceased, besides a job to her son and a house to the family only due to the pressure exerted by the union by staging a dharna in front of the hospital.

Payment of ₹50 lakh as insurance for ASHAs who died during COVID-19 duties, ₹1 lakh as retirement benefit and timely payment of salaries are among the benefits they are insisting on.

Increased workload is yet another factor troubling the fraternity. “One ASHA has been attached with each of the ward and village secretariats with a population between 2,500 and 8,000. This is against the NHM guidelines which say that one ASHA be attached to every 1,000 people,” she points out. Absence of job security, leave facility, insurance cover, Provident Fund and Employees State Insurance facilities are other issues compounding their woes.

The plight of the Anganwadi Workers and Helpers is more or less the same. Like ASHAs, they also play an essential role taking up the responsibility for nutrition services including distribution of supplementary nutrition, growth monitoring and nutrition counselling along with providing pre-school education to children below six years of age.

“We are the first point of address for any health-related issues faced by the poorer sections, as we involve with the primary health care, especially of women and children of the poor and deprived, and yet we don’t get the recognition we deserve,” rues K. Subbaravamma, State general secretary of AP Anganwadi Workers and Helpers’ Association.

A functionary of the Integrated Child Development Scheme (ICDS), the Anganwadi Worker is supported by a part-time assistant, Anganwadi Helper. “With a depleted budget allocated to the ICDSs, the schemes that once thrived have lost steam,” says Ms. Subbaravamma indicating severe fund crunch affecting their daily functioning.

They work for an honorarium which is far from adequate. “We want to be recognised as government employees with minimum wages,” she says. Teacher’s death due to COVID-19 sparks tension in Chittoor