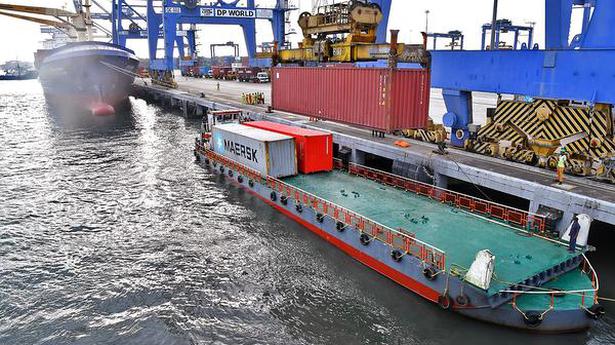 
The transportation of containers through the Kottayam-Kochi National Waterway (NW) corridor will resume in a fortnight after a two-year lull, decongesting roads and at the same time ushering in an economical, eco-friendly and energy-efficient mode to ferry cargo.

A 240-tonne barge capable of carrying up to twenty 20-feet containers had conducted four trips in the corridor, which is part of NW IX and NW III, in March 2019, carrying export / import cargo. The transit time along the 85-km waterway is around seven hours.

“The vessel will shortly be dry-docked and put into service later this month, this time to ferry wheat, rice, and tiles. Efforts will be made to procure a second bigger barge to operate on the under-utilised route which holds tremendous potential. Waterway transport of cargo is 30% cheaper as compared to the road route, while materials like tiles can be transported without the risk of them cracking when being taken through ill-maintained roads,” said Abraham Varghese, managing director, Kottayam port.

Between 250 and 270 container loads of wheat and rice arrive every month at the Kottayam port. Transporting them through narrow and congested roads will worsen traffic hold-ups and pollution. A shift to waterway transport will considerably help lessen the carbon footprint of transporting such a volume of cargo. The Kottayam port will become an even busier hub for cargo transit in central Kerala, once the Vizhinjam port is commissioned, it is learnt.

“Transportation of fuel and other hazardous goods too must be shifted to waterways, since tanker lorries pose safety hazard to road users. The State government can step in by providing incentives to woo cargo operators to inland waterways that abound in Kerala. On their part, personnel of Customs, Inland Waterways Authority of India (IWAI), and Cochin Port Trust were of tremendous help in incorporating the Kottayam port, the sole inland container depot in Kerala which was accorded the status of a minor port by the State government, in the system,” Mr. Varghese said.

“We will provide all assistance for barge operators on the route,” said Mathew George, Director, IWAI. The agency had cleared weeds and arranged pilotage to the vessel which operated the first trip, in 2019. This might not be necessary this time. The cost savings, vis-a-vis road transport, will increase when cargo is ferried over longer distances, he added.

From Kottayam, the barge will transit through Alappuzha, Muhamma, Thannermukkom, Vaikom, and Aroor, following which it will reach the Vallarpadam container transshipment terminal, Mr. George said.

KSRTC directed to give pension to retired conductor

1,042 take oath of office in Pathanamthitta