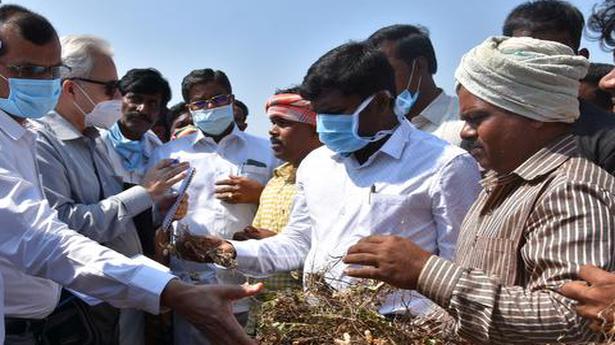 
Central Government’s Inter-Ministerial team on Monday toured three villages in Vajrakarur and Guntakal mandals of the district to get first-hand information regarding the damage incurred by the groundnut crops during the months of June and July when incessant rain lashed the district.

The team, comprising Ministry of Finance Consultant R.B. Kaul and Ministry of Agriculture Joint Director K. Ponnuswamy, was reportedly shocked when they met two such farmers who faced complete yield loss in 15 acres, where they had spent ₹4.5 lakh.

Commissioner of Agriculture Arun Kumar and District Collector Gandham Chandrudu along with Joint Director Agriculture Ramakrishna explained to the Central team that due to the excess rain, there was vegetative growth, but against 30 to 35 pods per plant, 5 to 6 pods in some cases, and 10 pods in others were recorded in the crop cutting exercise, and they submitted all relevant documents. In local parlance, the situation is described as “green drought” as there is vegetative growth but no yield.

Speaking to mediapersons after the team’s visit, the District Collector said the central team had been under the impression that only 9,890 hectares of the total 4,74,404 lakh hectares of groundnut crop sown in the district was lost, but the team was made aware of the ground reality that there was 50% yield loss in 4,61,000 hectares.

The District Collector said the team noted the situation and reacted sympathetically. While the normal yield is 11 quintals per hectare, this time the yield fell to below 5 quintals. At ₹5,275 per quintal of MSP for the groundnut, they would make ₹26,350 per hectare and the cost of cultivation comes between ₹25,000 and ₹30,000 per hectare, the team members were explained.

Mr. Gandham Chandrudu elaborated that the loss has been estimated at ₹1,200 crore on agriculture crops alone and another ₹150 crore on horticulture, roads, and other infrastructure loss due to floods. Minister for Roads and Buildings Malagundla Sankaranarayana also met the team members in Guntakal and briefed them about the loss.