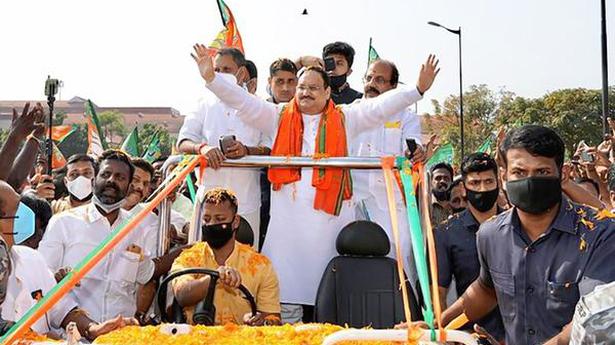 Addressing a public meeting at Thekkinkadu Maidan here on Thursday to kick-start the party’s campaign for the Assembly elections, Mr. Nadda said both fronts lacked vision. The State machinery was steeped in corruption and law and order had taken a turn for the worse.

Leaders of both fronts defamed the image of the State, he said. “If one has a passion for gold, other one has an interest in solar energy. And there is a shadow of women in both cases. The Speaker has brought shame for the post.”

Chief Minister Pinarayi Vijayan was alleging witch-hunting by the Centre against his government. By questioning the CAG report, the LDF was unleashing attacks on constitutional institutions, he said.

“The Modi government is giving special attention to Kerala,” Mr. Nadda said. He said the Centre had allotted ₹19,000 crore to reduce revenue deficit of the State.