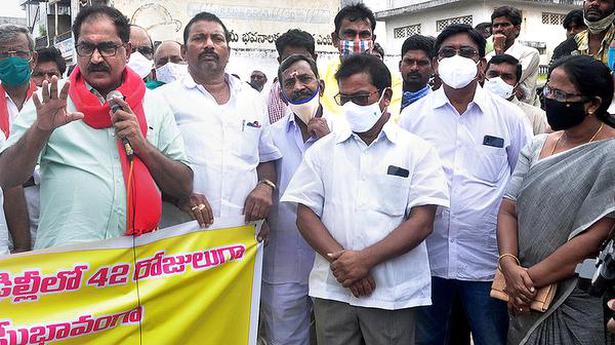 The BJP dispensation at the Centre is bent upon protecting the interests of the big corporate entities as is evident from its “callous indifference” towards the farmers’ relentless agitation demanding the repeal of farm laws on the borders of New Delhi, said the CPI (M) State secretary Tammineni Veerabhadram.

Braving the severe cold wave conditions, thousands of farmers are continuing the agitation on the periphery of the national capital with unwavering resolve demanding the roll-back of the three farm laws, he said, alleging that the BJP regime remained adamant. He was addressing a gathering of farmers, agricultural labourers and the party cadres after participating in a human chain at the grain market here on Wednesday.

The CPI (M) three town committee organised the human chain expressing solidarity with the farmers protesting against the farm laws near New Delhi. “The BJP regime is hell bent on handing over the farm sector to the big corporate companies to allow them exploit farmers and thrive. The ruling dispensation’s anti-farmer policies are aimed at allowing big corporate firms to monopolise the farm sector,” he charged, alleging that these detrimental policies will weaken the agriculture sector, the backbone of the country’s economy, and deepen the agrarian crisis.

Reopening of schools for classes 9 and above from Feb. 1 KCR is a better actor than me, says Vijayashanti

Dear Sir, we are delighted to inform you that our Auto Response service has been upgraded to superior human-like, honest,