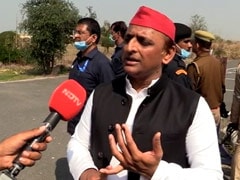 “The BJP is going to be eliminated. Farmers of UP won’t forgive them,” Akhilesh Yadav said.

Samajwadi Party chief Akhilesh Yadav said his party has “hit a century” in the first two phases, as Uttar Pradesh votes in the third phase today. Fifty-nine seats across 16 districts are going to polls today, of which the SP had won only nine. The BJP had won 49 seats.

“We have hit century in first two phases and even in the next two phases, the Samajwadi Party alliance will be ahead of everyone else,” Akhilesh Yadav, seen as the big challenger of the state’s ruling BJP, told NDTV today after casting his vote in Jaswantnagar.

In the battle for Uttar Pradesh — said to be the semi-final before the general election of 2024 — 113 seats went to polls in the first two phases. A chunk of them were in the crucial western part of the state, the hub of farmers’ protest.

Mr Yadav has augmented his Muslim-Yadav support base with small parties that command a following among the Other Backward Classes. His key ally is Jayant Chaudhary of Rashtriya Lok Dal, whose supporters have influence on more than 30 seats.

In a first, Mr Yadav is contesting the state elections. The seat is Karhal — part of his family turf Mainpuri — and his opponent is the BJP Union Minister SP Singh Baghel.

The seat is currently represented by party strongman Sobaran Singh Yadav, who won the seat from the BJP in 2002 and then switched to the Samajwadi Party.

“The BJP is going to be eliminated. Farmers of UP won’t forgive them,” Mr Yadav said.

Targetting Chief Minister Yogi Adityanath, he added: “Baba remained the Chief Minister for five years. Why did you not give the facility to your medical college that PGI has? Who is responsible? The development of Saifai is not for a day. Baba CM doesn’t have to do any work, don’t have to see any good work.”

While the BJP won in 2017 with a sweeping mandate, this election is expected to be a referendum on the state government led by Yogi Adityanath, who has been criticized over his handling of the second wave of Covid.

Rural Uttar Pradesh was hit hard and images of bodies floating down Ganga and buried on its sandbanks, had shocked the country.