Shah Rukh Khan’s most awaited film Pathan has been released on 25 December. The film became a victim of the boycott trend months before its release and then the uproar started as soon as the trailer came out. When the song Besharam Rang from the film was released, even the saffron bikini worn by Deepika Padukone in the film could not escape the controversy. The reason for this was Deepika’s saffron bikini seen in the song and the lyrics on it were shameless.

The film was accused of hurting religious sentiments and the demand for the film’s ban began to intensify. Seeing the increasing controversies before the release of the film, the Censor Board of Film Certification (CBFC) demanded changes in some controversial or sensitive things from the film, which the makers have completed. About two dozen words like PMO, Mrs Bharatmata were removed from the film and changes were also made in the songs.

As soon as the film is released, take a look at the scenes that people objected to and know what changes have been made in the film.

A scene in the song Besharam Rang was in controversy. Deepika gave bold poses with Shahrukh in orange bikini. The censor board suggested the removal of those scenes, after which the makers removed that one scene from the film. In the first released song of 3:13 seconds, a bold romantic scene of Deepika and Shahrukh was shown at 3:00 minutes, due to which the censors objected.

This scene has been deleted from the film Pathan.

John Abraham is in the role of X Indian agent in Pathan film. Those who were honored with Ashok Chakra as per the previous story considering them as martyrs. But the censor objected to the use of Ashok Chakra in the film. Now Ashok Chakra has been made a Veer Award.

The names of Prime Minister and PMO were also removed from the film.

Words like PM, PMO, President and Minister were used at many places in the film, but such words have been separated from 13 scenes.

Changed dialogue to honor the soldiers

It is shown in the film that Shah Rukh Khan forms a special team named JOCR, in which such soldiers were added, who have been evacuated from the army due to injury or weakness. For such soldiers, Ashutosh Rana had used the word lule-lame. However, now instead of this the word broken has been used in the film. Apart from this, wherever there was the word erstwhile KBG in the film, the words erstwhile SBU have now been inserted.

Shah Rukh Khan serves Deepika Padukone a drink in a scene. Scotch was used earlier in this scene, where Deepika abuses Scotch by calling it cheap. Now after the change, Scotch word has been removed from the film. Apart from this, the black prison Russia, which was used at one place in the film, has now become only black prison.

The film got the green signal after the changes

With these changes, the censor board has given a ‘U/A’ rating to the makers of ‘Pathan’. Details about how many seconds of footage have been censored from the film have also not been revealed, but now the runtime of the film has been 146 minutes i.e. 2 hours 26 minutes.

Pathan’s amazing before the start of advance booking: more than 1 lakh tickets sold, the film will be released on about 10000 screens

Rajamouli met James Cameron like a fan: said – I am a fan of your work, Cameron offered to make a Hollywood film 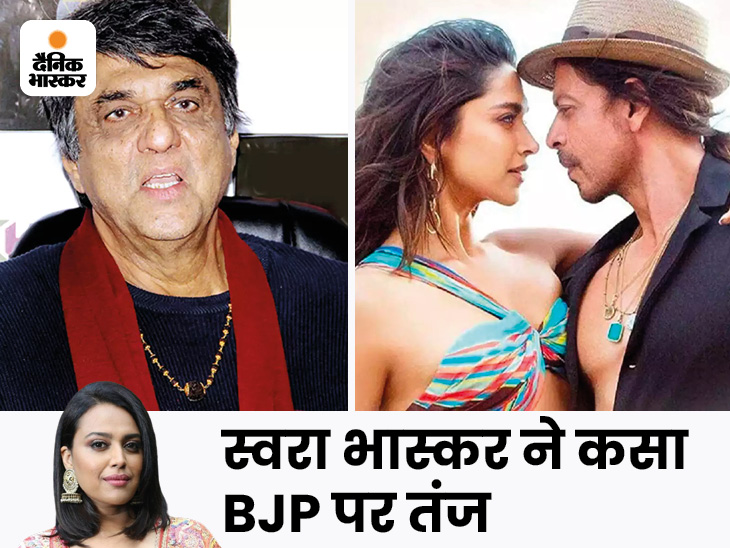 Mukesh Khanna raised questions on the Censor Board: Pathan said on Besharam Rang Song – Our country has not become a Spain, which should bring such songs