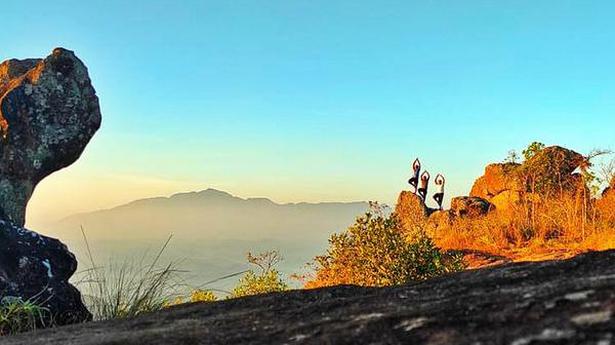 
The picturesque Cheengery Mala, a new addition to the tourism map of Wayanad district, has become a favourite destination for adventure tourists.

The District Tourism Promotion Council (DTPC) gave a facelift to the destination to tap the adventure tourism potential of the Cheengery hills near Karapuzha dam.

The Revenue Department had handed over eight acres to the DTPC for the purpose.

The destination was opened for tourists on December 21, 2020.

“The department has spent ₹1.04 crore for the first phase construction work at the site. As many as 4,670 tourists had visited the site till January 29,” P.P. Praveen, Manager, Marketing and Events, DTPC, told The Hindu.

A 500-metre trekking though the leisure trail and a 1.750-km guided trekking to the hilltop are the major attractions of the new destination.

An entrance plaza, cafeteria, VVIP launch, ticket counters, parking area and a toilet block have also been set up on the hill slope as part of the project.

A spectacular view is awaiting tourists when they reach atop the hill, around 2,200 ft above median sea level.

They would get a 360-degree view of Wayanad from the hill top, and major tourism destinations in the district such as Karapuzha reservoir, Chembra peak, Edakkal caves, and Banasura mountains are visible from there.

When other trekking destinations in the district such as Chembra peak under South Wayanad forest and Brahmagiri mountains under North Wayanad forest divisions would close to tourists at the advent of summer and monsoon owing to security reasons, Cheengery Mala will be open for tourists round the year, Mr. Praveen said.

The DTPC is planning to set up outstay facilities such as tents for tourists on the hill slope from the first week of February. “The trial run was a huge success and we are planning to set up 10 tents, each tent for a three-member group, at the leisure zone,” Mr. Praveen said.

Facilities such as sleeping bags, food and power supply to tourists would be provided at a nominal rate, he added.

“We have submitted a master pan of ₹1 crore to the government for the second phase development activities of the site including erecting chain link fences around the site, development of parking area, road widening works and setting up security arrangements like installing CCTV cameras,” Mr. Praveen said.

Inquiry into Swapna’s charge to be expanded