The eight-lane expressway to connect Chennai with Salem has its detractors among farmers. While the government argues that it will reduce travel time and is essential for the development of the region, farmers are certain they do not want to lose their precious land to the project. After the recent Supreme Court ruling, protests have been resurrected

While the Supreme Court’s December 8 ruling allows the National Highways Authority of India (NHAI) to acquire land for the proposed ₹10,000-crore expressway to connect Salem with Chennai, the affected farmers are now pinning their hopes on the project failing to get environmental clearance. Unwilling to part with their land, farmers want the State government to put pressure on the Centre to drop the project.

The ruling overturned the Madras High Court’s April 2019 verdict that quashed the land acquisition notification. The High Court had said the acquisition process was undertaken in haste. And the project became a significant point in the manifesto for the western region during the 2019 Lok Sabha election. The State government has been maintaining that the benefits are many, and the expressway will cut travel time by several hours, besides leading to the development of the region. Parties rallied around the farmers who were opposed to the project and took on the ruling AIADMK that was keen on implementing it.

Welcoming the Supreme Court order, NHAI officials say they have received the terms of reference for the project, and two studies have been done. Public consultations will be held soon according to the rules. “First, we will approach the Tamil Nadu Pollution Control Board, which will be responsible for its conduct. Then we will have to take time to seek objections and then award and disburse the amount due,” says an official. Former officials, however, say the project will be delayed by at least 30 months, thus driving up the cost.

The Supreme Court’s ruling comes at a time when parties gear up for the 2021 Assembly election, and they may look at the possibility of using the project as a plank in the region. A. Chandramohan, State co-ordinator of the All India Kisan Sabha, says farmers are firm in opposing the project. The governments at the Centre and in the State will have to risk an electoral setback if they decide to go ahead with the project, he warns. Parties that have been opposing the project should flag it as a major issue in their manifestos, he says.

The High Court had found the process vitiated by the charges of police high-handedness against protesters and submission of a detailed project report with plagiarised content by the project consultant, among others. The Supreme Court, however, declared that the competence of the consultant was not challenged by the petitioners and was not enough cause to set aside the land acquisition notification.

The Supreme Court also upheld the legislative competence of the Central government to declare any land a highway under the Land Acquisition Act, 1956, something that was upheld by the High Court, too, when the petitioners argued that it was the State legislature that was the competent authority to do so. The Supreme Court also held that it was not ultra vires the Constitution, pointing out that the Constitution gives powers and legislative competence to Parliament.

The High Court had questioned the reasons for the sudden change in the sections — from the Chennai-Madurai stretch that was originally conceived under the Bharatmala Pariyojana to a greenfield corridor between Chennai and Salem through Krishnagiri — without the approval of the Cabinet Committee on Economic Affairs. But it had stopped short of declaring it mala fide. Though the High Court acknowledged that courts should not intervene in policy matters, it, however, questioned the utility of the project. It flagged questions over food security, as a consequence of diversion of vast tracts of agricultural land, and alluded to the judgments from U.S. courts.

EC only before construction

The Supreme Court, however, rested its ruling on the “technical and scientific” expertise of the expert committees of the NHAI, which is an arm of the Union Ministry that took the decision to change the section. The court, thereby, implied that a judicial review of a “policy decision” would be unwarranted. Further, it accepted the Centre’s argument that the length of the Chennai-Krishnagiri-Salem corridor was less than the Chennai-Madurai corridor, and it would not entail any additional cost.

The Supreme Court also held that environmental clearance was not mandatory for the notification and it was mandatory only before undertaking construction or implementation of the project. According to the court, it was not necessary for the the Central government/the NHAI to apply for prior environmental/forest clearances or permissions at the stage of planning or taking an “in-principle” decision to formalise the project for constructing a greenfield highway. Such clearances can happen only after the land is vested with the government, once after the notification is made under Section 3 (D) of the Land Acquisition Act, 1956, and not prior to the notification under Section 3 (A), which is a declaration of intent to acquire land for a public purpose.

The verdict also foreclosed the scope of the competent authorities under the environmental law/forest law stating that their power was limited to scrutiny of a formalised project brought up by an executing agency for ascertaining the environmental impact and imposition of remedial conditions.

Drawing a comparison between a highway and an industrial project spread over a vast expanse of area, the court believed that the former only gave a way of passage without much disturbance, while the latter had an impact on the local population owing to the continuous commercial/industrial activity. Therefore, according to the court, environmental impact would have to be measured “in relative terms, at the local level and site-specific. Whereas, the requirement for a road/national highway was in the larger national interest”, rendering environmental clearances perfunctory.

“We will not give up our lands”

That being the position, landowners want the Centre to drop the project, believing that nothing else will bring respite to them. “Farmers will not give land for the project,” says R. Mohanasundaram, a farmer from Pullavari in Salem, who claims he will lose six acres to the project. It will not get environmental clearance if the assessment is made in a transparent manner, he says. “The Supreme Court’s judgment has more or less retained the positive elements of the judgment passed by the Madras High Court. It has permitted the Centre to go ahead with the project only after following due procedures,” he points out.

“The State government should now put pressure on the Centre and make it drop the project. The project involves destruction of several acres of forests, agricultural lands and several waterbodies,” says Mr. Mohanasundaram. “Chief Minister Edappadi K. Palaniswami’s claims about the project are not true. If he is a farmer as he claims, he should stop the progress of the project at any cost.”

According to official sources, nearly 36 km of the project passes through Salem district.

J. Pannerselvam of Koolampatti in Salem district says he will lose three acres. “We are not against development. Farmers are only questioning the need for this project when there are already three roads connecting Chennai with Salem, besides the rail and air connectivity. The road is being laid only to favour corporates. Our only demand now is that the governments should drop the project that will affect farmers in 18 villages,” he adds.

The land acquired for the Ulundurpet-Chennai Highway has space for expansion, he says, adding that expansion of the existing roads will be sufficient to facilitate freight movement.

DMK MP from Salem S.R. Parthibhan wants the government to hold discussions with farmers, instead of taking away their land and depriving them of their livelihood. The party will raise the issue during elections and demand that the government drop the project, he says. DMK MP from Dharmapuri Senthilkumar says his party will scrap the project when it returns to power. “I am meeting with the farmers on December 16 at Paapireddypatty to hold consultations with them,” he says.

Meanwhile, farmers have resolved to stage a blockade of the Collectorate in Dharmapuri on December 28 and observe Pongal as a day of mourning. They have also planned a blockade of the State Assembly during the Budget Session in February next year.

(With inputs from Vignesh Vijayakumar in Salem and Deepa H. Ramakrishnan in Chennai) 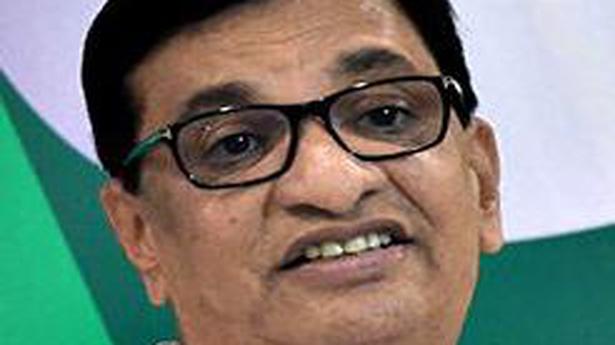