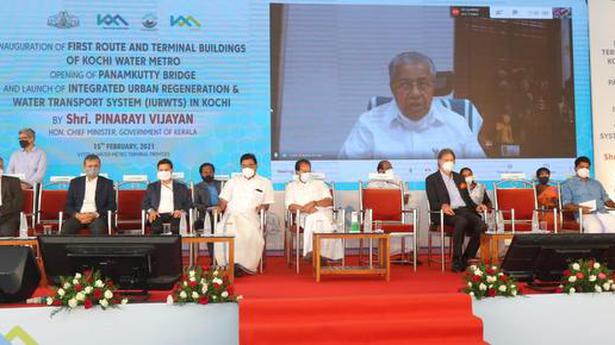 
The ₹747-crore Water Metro project of Kochi Metro Rail Limited (KMRL) would emulate Kochi Metro as yet another innovative and sustainable mode of urban commuting in Kochi, providing an eco-friendly and accessible transportation mode, especially for people living in 10 islands off the mainland, said Chief Minister Pinarayi Vijayan, after inaugurating online the first route (Vyttila-Kakkanad) of the project on Monday.

The twenty-three 100-passenger capacity, battery-powered, disabled friendly, AC ferries that will be introduced in the project’s first phase will boost the tourism prospects of the islands. There will be zero reliance on fossil fuels. Sixteen of the total 38 terminals will be completed in Phase One, of which the Vyttila and Kakkanad terminals are ready. The terminals will have floating pontoons, thus enabling safe entry and exit of ferries, irrespective of high or low tide. The ferries would thereafter be extended up to Infopark and Smart City, aimed mainly at IT professionals, the Chief Minister added.

The German development assistance agency KfW will provide a soft loan totalling ₹579 crore for the project, which is expected to lessen annual carbon emission in the Greater Kochi area by 16,500 tonnes. Electric autorickshaws and buses will operate feeder services to the ferries. Another batch of fifty-five 50-passenger capacity ferries will be launched in Phase Two of the project, which is claimed to be the first of its kind in Asia.

Mr. Vijayan also inaugurated the Panamkutty bridge that connects Pettah and Thripunithura across the Poorna river, built by KMRL as part of widening the Pettah-S.N. Junction corridor into a four-lane road. “This is as part of the preparatory works of Kochi Metro’s Thripunithura extension. The 250-meter bridge was constructed at a cost of ₹17.2 crore in 15 months, as against the 22-month deadline. This shows the professionalism of the metro agency. The old, 50-year-old bridge was narrow and did not have a footpath,” he said.

In his address, Walter J. Lindner, German Ambassador to India, who was special guest on the occasion, said the first ferry of Water Metro was expected to begin service in another five weeks. “KfW’s is a soft loan for the project. Germans love to visit Kerala since its Ayurveda is very popular. The State’s eco-friendly nature begins as one lands at Cochin International Airport, the sole fully-solar-powered airport in the entire planet,” he said.

In his address, Chief Secretary Vishwas Mehta said Kerala’s waterways held massive untapped potential to ferry passengers and cargo. “The Water Metro ferries would have a common command and control centre [near its Vyttila terminal],” he said.

Water Resources Minister K. Krishnankutty presided over the function, while Kochi Mayor M. Anilkumar and KMRL Managing Director Alkesh Kumar Sharma were among those who spoke. 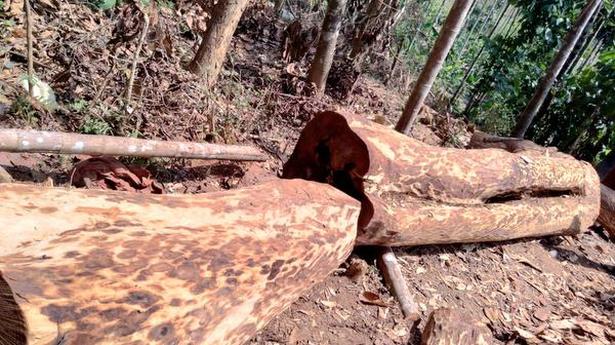 Ordinance to ensure that stakeholders can seek stay on arbitral awards