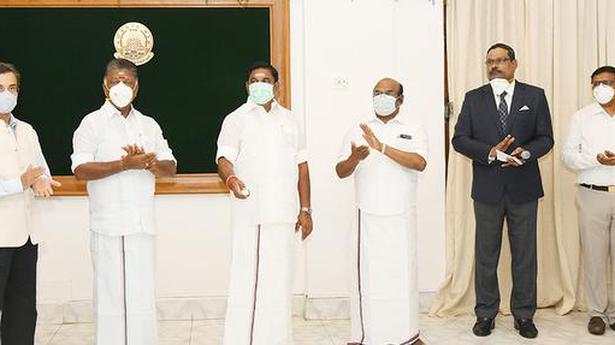 Drinking water projects and related works implemented at a cost of ₹1,137.18 crore

The drinking water projects and related works were implemented at a cost of ₹1,137.18 crore. They include works of the Tamil Nadu Water Supply and Drainage Board (₹931.61 crore), the Chennai Metropolitan Water Supply and Sewerage Board (₹82.6 crore), Commissionerate of Municipal Administration (₹100.51 crore) and the Directorate of Town Panchayats (₹12.87 crore) and Greater Chennai Corporation (₹9.59 crore).

Mr. Palaniswami also unveiled the foundation stones for new projects to be implemented by the Tamil Nadu Water Supply and Drainage Board and the Directorate of Town Panchayats at a cost of ₹2,472.61 crore, according to an official release.

He unveiled 5,503 housing tenements in 10 districts constructed for the Tamil Nadu Slum Clearance Board at a cost of ₹535.27 crore. The tenements have been constructed in Chennai, Vellore, Tiruchi, Thanjavur, Coimbatore, Tiruppur, Erode, Theni, Kanniyakumari and Tirunelveli districts.

A project to extend the flyover from Athupalam junction to Oppanakara Street in Ukkadam junction, to be implemented at a cost of ₹265.44 crore, was also unveiled.

He also laid the foundation for new cancer treatment facilities, and a new building for linear accelerator device near the Radiology Department.