Latest News
February 17, 2021 Divya Bharat 0 Comments North Delhi Mayor Jai Prakash visited the family of Rinku Sharma, on Wednesday and announced that the road intersection near his house will be named after him., who was allegedly murdered last week in Mangolpuri


North Delhi Mayor Jai Prakash visited the family of Rinku Sharma, who was allegedly murdered last week in Mangolpuri, on Wednesday and announced that the road intersection near his house will be named after him.

A day earlier, BJP leader Kapil Mishra had met Sharma’s family to provide financial assistance of ₹1 crore and alleged that the youth was targeted and killed for taking part in collection of donation for Ram temple construction in Ayodhya.The BJP, VHP and Bajrang Dal have alleged that the incident was a fallout of Sharma’s participation in a donation drive for the Ram temple.

“The North Delhi Municipal Corporation will name Mangolpuri chowk in the name of Rinku Sharma, for which a proposal will be tabled by the area councillor Raj Prakash,” the Mayor was quoted as saying in a statement issued by his office.

Mr. Panda said it was unfortunate that even a week after the incident, Chief Minister Arvind Kejriwal had not spoken to the family. “Kejriwal saab, will you take the pains to visit the bereaved family or your crocodile tears are reserved for anti-nationalists and those espousing war against country”? Mr. Panda asked.

Mr. Gupta demanded financial assistance of ₹1 crore for the his family besides a job in the Delhi government for next of kin. 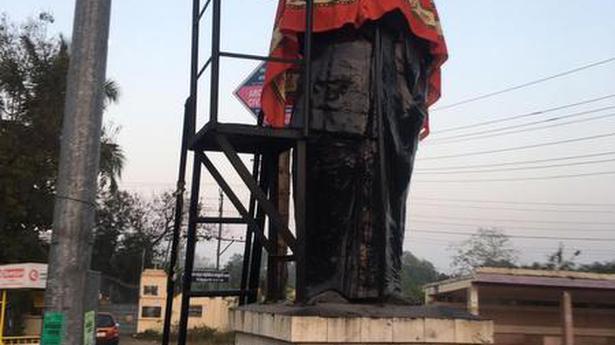